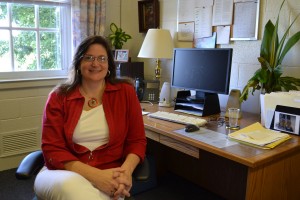 Ally Boni | The Bucknellian
Lynn Breyfogle will replace Elaine Hopkins as the new Dean of Arts and Sciences. Breyfogle has previously taught at the University for 11 years. 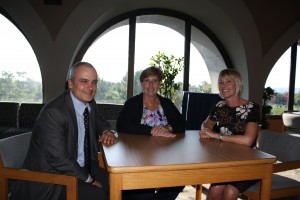 A welcoming reception for new administrators Assistant Provost for Research Carol Burdsal, Associate Provost for Diversity Bridget Newell and Director of Institutional Research and Planning Kevork Horissian took place in the Arches Lounge of the Elaine Langone Center on Sept. 12. The event was attended by about 30 people and refreshments and appetizers were served. The welcoming of these new staff members signifies an unusual move for the University administration, making three new appointments in a single year.

“This is an unusual year for hiring because it reflects Bucknell’s expansion and the need for new roles, whether as a result of previous staff retiring or leaving,” Provost Mick Smyer said.

Burdsal’s new role was previously called the Director of the Office of Sponsored Research, held by Joanne Romagni. The Assistant Provost for Research will emphasize working with staff members more than the previous role did. Burdsal will help faculty find sources to fund their research and protect their intellectual property, as well as work with fellowship advisors to coordinate undergraduate competitive fellowships, such as the Fulbright Program.

“At Bucknell, our general model is that professors are teachers and researchers too,” Burdsal said at the welcoming reception. “We encourage professors to be asking their own questions as they work to foster a more engaging learning environment.”

Horissian will be filling the position of the retired Jerry Rackoff, the previous director of Institutional Research and Planning. His duties will relate to fulfilling the University’s need for data and data analysis, which will be used partly for admissions, but mainly to address students’ needs.

“Basically, we want to go even farther than other higher education institutions, who haven’t done a good job of making decisions based on their data analysis. Our data focuses on students’ ‘life cycles’–tracking students as prospects to when they are alumni–to examine what characteristics data is telling us at each stage. The ultimate goal is to help students,” Horissian said.

Newell will occupy the newly created position of Associate Provost for Diversity, a role that reflects the University’s focus on diversity in the community. President John Bravman and Smyer made major steps in their goals for diversity last spring with the creation of the Diversity Council. Newell, along with Associate Dean of Students for Diversity Thomas Alexander (who was hired last spring), will be a member of the council.

Newell’s arrival aligns with the University’s goals to institutionalize focus on diversity and equity on campus.

“Since this is only my third day on the job, I can’t say that I have any ambitious plan, but I want to start with meeting and talking to students, faculty and staff to really learn and listen to what’s happening on campus. From there, I hope our diversity plan will pervade all of campus and reach as many people as possible, rather than occupy one corner of campus. The resonating goal within all this work is to prepare our students to live and work in a diverse world,” Newell said.

“I think the new administrators have the potential to make a change. I think everyone can bring in diversity, but only time will tell if this will work. I know on this campus they try to bring diversity through activities, but I think we have to wait later in the year or maybe even next year to see things change. I think it’s great, though, that they are doing this,” Donald Kaplan ’16 said.

“It’ll be a great undertaking trying to change the campus from the way things currently are. I am not saying it cannot be done, just that it’ll be probably be more work than any one person can handle. Everyone needs to be on board with this for things to head in the right direction,” Matt Reed ’14 said.

The addition of three new administrative roles is certainly ambitious, and the welcoming reception for Burdsal, Horissian and Newell set the tone for the change to come in the upcoming year.