The men’s and women’s rowing teams had hectic, event-filled weekends which featured program firsts for both teams. The women’s team raced Drexel and Penn on April 6 in Philadelphia then competed in the Occoquan Sprints in Virginia on April 7. The men’s team split up its squad, with its varsity eight competing in the San Diego Crew Classic in California while the rest of the team dueled with Drexel in Philadelphia on April 6.

The weekend began for the women’s team against Drexel. The varsity eight dominated the race and won by a solid margin of 6.6 seconds. Following a short rest, the team returned to action in the afternoon against perennial powerhouse Penn. In an extremely tight and hard-fought race, the varsity eight was victorious. The Bison defeated Penn with a time of 6:50.3, less than one second ahead of Penn’s 6:51.0 finish. This marked the first time in program history the varsity eight had defeated Penn and was the “highlight of the weekend” according to head coach Stephen Kish.

After a long night of travel, the women’s team was ready for more racing as it competed in the Occoquan Sprints. The team had seven boats in action and all four of the team’s eights made their respective grand finals. Although none were able to find victory in the grand final, they still put up solid performances. These boats and their finishes were: varsity eight (second), junior varsity eight (sixth), second varsity eight (fifth) and the novice eight (fifth).

“We look forward to building off of all the race experience we had last weekend to continue to develop as we move towards the Patriot League Championships in May,” Kish said.

The men’s crew team also had a busy weekend, splitting up its squad to race at two separate venues. The varsity eight traveled to California to compete in the prestigious San Diego Crew Classic. After winning its heat on April 6, the Bison found themselves against some very tough competition in the Cal Cup final on April 7. After a slow start, the team worked its way back through the pack towards the front. Unfortunately, there was not enough room for the team to complete its and the Bison finished in second place behind UC Santa Barbara with a time of 6:09.26.

Head coach Al Monte was “happy to see the varsity eight race a very gutsy and determined race against some very good crews.”

Both teams will look for victories this weekend in Cherry Hill, N.J. at the Knecht Cup Regatta.

The men’s and women’s rowing teams opened their seasons on March 30 at the Murphy Cup Regatta, hosted by Temple University, on the Cooper River in Cherry Hill, N.J.

The women’s team came into the event with seven boats scheduled to race and was looking for strong performances out of all of them. The team completed this goal as they advanced five boats to their respective finals. In the freshman eight, the team cruised easily through the heats, and finished in the final with a time of 7:10.05 to earn the bronze medal. This finish was followed by the second varsity eight which, like the freshman eight, easily advanced to the final, but was not able to earn a medal as they finished in fifth. In the varsity eight event, the Bison placed two boats in the six-boat final.

In the Grand Final, which featured top competition from powerhouses Buffalo, Williams and Navy, neither boat was able to take a spot, finishing in fifth and sixth places.

The best performance of the day for the Bison was in the varsity four event, in which the team recorded a gold medal winning time of 8:05.97. The next event for the team will be this weekend with races against Drexel and Penn on the Schuylkill River in Philadelphia.

The men’s crew team was also looking for a strong early season performance from its team against some tough competition. The day began with the novice eight event where the Bison were not able to qualify for the finals with a fifth place performance in their heat. The freshmen redeemed themselves when the eight split into two fours and advanced both to the Grand Final in the novice four event. In this final, the “B” boat finished sixth with a time of 7:34.48 and the “A” boat earned the silver medal, only narrowly losing to winner La Salle, in 7:10.61.

In the Grand Final, the varsity eight saw a fast field featuring perennial powerhouses Virginia, Temple, Drexel, Williams and UNC. In a tight race, the Bison lost the battle for third with Temple and Williams and finished in fifth with 6:00.22.

The men’s team will split up this weekend with the varsity eight traveling to California to compete in the San Diego Crew Classic, while the remainder of the team will dual race Drexel on the Schuylkill River in Philadelphia. 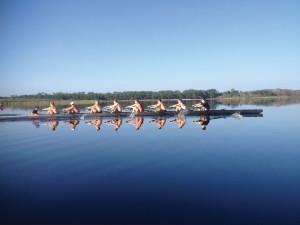