The men’s team totaled a 904 for the 54-hole tournament. Binghamton won the tournament with 868. Schuyler Stitzer ’14, who finished with a 71 in the final round and a 221 total, earned an 11th-place finish in his first collegiate away meet. Stitzer felt his putting was the biggest reason for his improvement in score throughout the weekend.

“The only real adjustment that I made throughout the tournament was being careful on the greens,” he said. “It was really easy to three-putt, and the more rounds I played the more comfortable I felt on the greens and by the last nine holes I was able to make some nice putts.”

“This course played to my strengths because the course was pretty much in front of the player … the holes were laid out in such a manner so that they were distinctive. [It was] … easy to understand where to hit the ball off the tee and which pins to attack,” Bachman said. “This allowed me to hit a lot of greens over the three rounds and make a lot of pars.”

The women finished 10th with a score of 942, while host Wisconsin won the 54-hole tournament with 879. Three Bison posted scores of 74 or better on the final day. Kasha Scott ’14 led the way, posting a one-over-par 73, and Minjoo Lee ’12 and Katie Jurenovich ’11 each shot 74s. Lee finished with the best score of the tournament for the Bison, compiling a 230 to earn a 22nd-place tie.

The women’s team returns to action this weekend at the Nittany Lion Invitational in State College, Pa. The men return  Saturday, Oct. 9 for the Joe Agee Invitational in Williamsburg, Va. 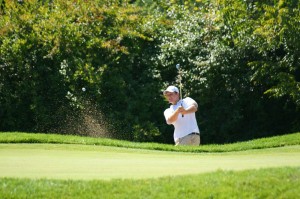 The men’s golf team came from behind to win the Bucknell Fall Invitational for the fourth straight year last weekend, defeating Robert Morris by a single stroke.

The Bison ended with a team score of 888, compared to Robert Morris’ 889. Fordham came in third with a 894 and Lehigh and Laval were tied for fourth with 896s.

Thirteen teams competed in the field, including an additional Bison “blue” team that came in 11th, shooting 912, but posted the third-best score of the day on Saturday with a 299.

Jon Hartman ’13 of the “blue” team was the top finisher for either Bison team, finishing in second place with 214. After shooting 77 in the first round, Hartman finished with rounds of 68 and 69 to close the tournament. Hartman finished three strokes behind C. G. Mercatoris of Robert Morris, who was the individual champion.

The Bison men travel to Ithaca, N.Y. this weekend to compete in the Cornell Invitational.

The women’s golf team was off this week and will travel to Madison, Wis. to compete in the Badger Invitational this weekend.

The women’s golf team scored a school-record 296 on Sunday to take first place in the Bucknell Invitational. The record-setting final round capped a remarkable weekend for the Bison, who tied the previous record with a 303 in the first round Saturday and nearly again with a 304 in the second round later that day. The team’s total score of 903 beat the previous program record by 40 strokes.

The Bison earned their second tournament win in program history and first since 2006, beating defending champion William and Mary by 19 strokes.

Katie Jurenovich ’11 tied the individual program record with an even-par 70 in the final round. Jurenovich won a four-hole playoff to become tournament champion after her three-round score of 221 tied Jeanne Waters of Rutgers.

Minjoo Lee ’12, who held the individual lead by one stroke at the end of the first day, finished third overall, one stroke behind Jurenovich and Waters.

The Bison will next travel to Wisconsin next weekend to compete in the Badger Invitational.

The men’s golf team finished second last weekend at the Colgate Invitational to open the 2010 season. On day two of the tournament, Will Bachman ’12 tied a program record with a score of six-under-par.

The team finished with a 36-hole total of 616, 10 strokes behind winner Colgate. The Orange and Blue were in second after round one of the tournament. Bachman was the only member of the team to break par in round two.

“I knew I had played pretty poorly the day before so I just forgot about that round and tried to play my best the second round,” Bachman said. “The course was wet, though, which made the greens more accessible.  The greens at Colgate’s course are pretty tricky, so a wetter course was an advantage in that regard because it made it easier to go for more pins.”

Ben Mattingly ’11 followed up his two-over-par 74 on Saturday with an 80 on Sunday, the second-best Bison score of the day. The individual winners of the tournament were Will Delano of Colgate and Kyle Kayturowski of Daemen with a one-under-par 143.

Despite the tough finish, Bachman sees a lot of positives for the team moving forward.

“As for the team, I think it’s always important to remember that we’re playing as a team and not as individuals,” he said. “In that sense it doesn’t matter so much what you shoot but how you do compared to your opponents.  Thinking about it that way takes some of the pressure off the individual player.  We have a lot of team chemistry; all the guys get along great and going to tournaments together is fun.”