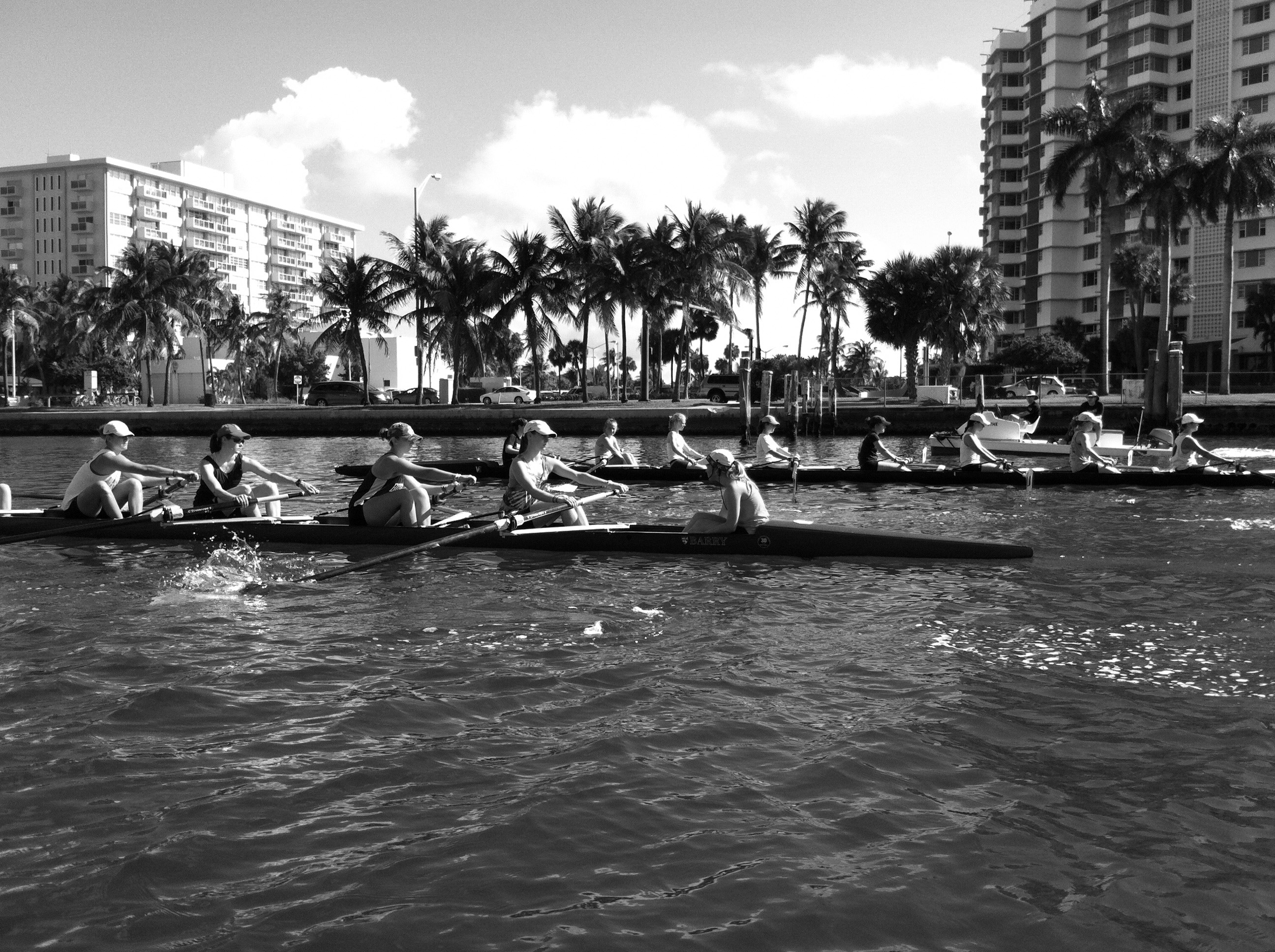 On Jan. 4, 20 Bison women’s rowers (two coxswains and 18 rowers) departed on an 11-day training trip to Miami, FL. It was far from a relaxation-only vacation. Though the temperature hovered around 80 F during the trip, the Bison were out on the water every day, doing a grand total of 28 rowing sessions over 10 days.

“The fact that we managed to complete 28 sessions in 10 days is a testament to the impeccable focus of our athletes,” head coach Stephen Kish said. “We accomplished something really unique; unlike anything else being done in the country.”

“The practice sessions had a heavy technical focus,” assistant coach Lauren LaPointe said. “This took the athletes’ understanding of their sport beyond mere conditioning into an awareness of the physics and biomechanics of the rowing stroke.”

The Orange and the Blue did get some free time to enjoy Miami. In addition to visits to South Beach and Lincoln Avenue, the Bison also enjoyed the company of some friendly dolphins and iguanas.

The women’s rowing team will return to action in March.

Edward Louie | The Bucknellian
Men’s rowing teams propelling themselves along a 2000-meter race against Drexel at Shamokin Dam last April.

Both the men’s and women’s rowing programs finished the spring season and entered the summer with a very successful couple of months.

For the seventh consecutive year, the Orange and Blue’s women rowers won the Patriot League Championship. Head coach Stephen Kish noted that a key to winning was the team’s training regimen.

“The championship is always exciting. It’s always a challenge and a question to see where we stand. We’ve established a history of success now, but our training is about more than pushing ourselves to be better than our fellow competitors. We train to be better than ourselves, day in and day out,” Kish said.

In many ways, winning the team championship at the Dad Vail Regatta was even more impressive than their Patriot League success.

“Dad Vail is one of the biggest regattas in the country and we won total girls team points. It was very exciting for us as a team to win total points,” Allyson Rivard ’14 said.

“We set out to have our fastest race possible and leave it all out on the race course–to realize our potential when it mattered the most, and I believe we accomplished that goal,” Monte said.

Connor Corwen ’14 also notes that this year has the potential to be another great season.

“I am very excited to see how this year pans out. It looks very promising as we have had many freshman walk on to the team that might be able to contribute right away. After last season, I know there will be no boundaries to our rate of success,” Corwen said.

The men’s and women’s squads look to build off their recent accomplishments and continue their success this coming season.

“I think our team performed really well this weekend against some tough competition,” Emily Gladstone ’13 said. “The 1V8 and 2V8’s grand finals were very close races and it gives us some great experience against solid competition going into our Patriot League Championship in 2 weeks.”

Facing intense competition from the Duke and Boston College boats, the Bison second varsity eight boat earned its first gold at the Knecht Cup in program history. Finishing in a time of 6:45.82, the Orange and Blue finished ahead of the Blue Devils and Golden Eagles by .97 seconds and 2.16 seconds respectively.

The top varsity eight boat fell in a close race to Duke by just over a second.  In the race, the Bison and Blue Devils boats completely blew away the rest of the field with the third-place boat from Buffalo finishing almost eight seconds off the pace.

This weekend the Orange and Blue will not race, but will turn their attention to an important weekend at the end of April. On April 28, the Bison head to the Mid-Atlantic Rowing Championship in Lewisberry, Pa. before heading back to Cherry Hill for Patriot League Championships on April 29.

The women’s rowing team picked up its first-ever regular season lightweight eight win over Princeton in the Bison’s only home event of the year last Saturday. The Bison varsity eight also won against Drexel.

They rowed to a 7:15.98 finish, more than three seconds ahead of Princeton. The victory did not come easily.

“It was a tough race, especially with Princeton closing our lead within the second half,” Vogelsang said. “Mentally and physically pushing through that was the key to ultimately pulling back out ahead.”

The day’s events also marked the first time the Bison have raced an Ivy League school at their home course.

The Bison’s openweight freshman eight raced against Princeton’s freshman lightweight eight and finished in 8:01.55, almost nine seconds ahead of their competitors. After only a short break, the same rowers lost to Drexel’s freshman eight.

In the second race after the break, the Bison’s second and third varsity eights competed against Drexel’s second varsity eight, finishing first and third respectively, with Drexel in second.

Head coach Stephen Kish was pleased with his team’s performance.

“It was an exciting day for the team. Drexel University has a great rowing program and our boats did a great job putting together a strong race and defending our home course.  The Princeton lightweights finished second at the national championship last year, so finishing ahead of them definitely felt good and showed us that we can be competitive at the top level,” Kish said.

The next action for the Bison will be this weekend at the Knecht Cup on the Cooper River in Cherry Hill, N.J.

“In the grand final, the varsity eight were in lanes one and two racing right next to each other just like every morning,” Christy Holodnik ’12 said. “Every morning the two boats push each other to be faster … and that is exactly what happened during the final.”

Two of the varsity eight boats with coxswains Jacqueline McKeone ’13 and Alexandra Higbee ’12 finished second and third respectively in the second heat of the competition while the third varsity eight boat with coxswain Katherine Anderson ’12 pulled out a first place finish in the third heat. McKeone’s and Anderson’s boats advanced to the final and took third and fourth respectively. The third varsity eight boat (cox: Higbee) advanced to the petite final taking first over Georgetown by almost five seconds to place seventh overall.

The second varsity eight boat took third in its heat and finished fourth in the final of its division. The Bison also had a strong showing in the novice eight with its boat taking first in its heat by seven seconds over Old Dominion. The novice eight boat continued to the final, beating out Delaware for first by about eight seconds.

“[We] had an exciting showing this past weekend,” Ally Cohen ’12 said. “All of our boats held their own against some tough competition.  We are looking forward to races to come and are excited to keep getting faster.”

The Bison will host Drexel and the Princeton Lightweights on Saturday at 8 a.m.

The women’s rowing team opened up its spring season with a sixth and third place finish in two varsity races at the Murphy Cup this past Saturday. After placing first in its qualifying heat, the varsity “A” boat was 5:02.61 slower during the finals, finishing behind Navy, GW, Buffalo, Saint Joseph’s and Massachusetts.

“Our first race of the season was definitely a tough one. A lot of good teams compete at Murphy Cup each year, and this year was no exception,” Gabby Ors ’13 said. “Based on our training plan, I think our team did exceptionally well, putting not one, but two of our top eights in the grand and petite finals of the First Varsity Eight event.”

Along with the two varsity eight boats, the Orange and Blue had two novice boats medal at the event. The novice four boat edged out Colgate for first in its race, while the novice eight earned the silver behind Drexel.

“It was very exciting and we got to bring and race the whole team, which is always an experience seeing as we have over 60 girls rowing this year,” Sarah Riessen ’14 said. “I believe we performed very well and got some great racing experience under our belts for the coming season. Every boat was focused on their own race and was able to be very competitive in their heats and finals.”

Taking part in their first event since the end of October, the team will use this event as a launching point for the rest of the season as they look to earn their seventh consecutive Patriot League title.

“I’d say there are a lot of improvements to be made within individual boats, and we are still utilizing the first few weeks of the season to develop the lineups for the top two eights. However, I think the team as a whole is definitely ready and focused on making this season one of our best yet,” Ors said.