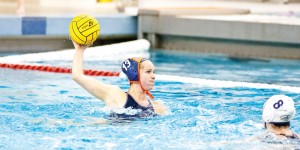 Edward Louie | The Bucknellian
Barbara Peterson ’15 winds up for a shot on goal. The women’s water polo team finished with three wins.

The Bison launched the weekend competition and their season with a 14-5 win over Mercyhurst. Highlight players of the game were Hannah Sunday ’16, Krystle Morgan ’13 and Julianne Valdes ’14. Sunday led the Bison with five goals, while Morgan and Valdes contributed three goals each. The Bison led the Lakers 7-1 at halftime, maintaining a lead of at least six goals throughout the second half.

The Bison then rebounded to defeat Brown 10-9. With the score tied 9-9 and just 1:36 left to play, Taylor Barnett ’15 scored the game-winning goal. To secure the victory, Rena Heim ’14 saved a shot on goal with less than a minute to go.

The Orange and Blue added to their wins with a 9-4 victory over Villanova. Sunday scored four goals, assisting in an 8-0 lead during the game. This win brought the Bison’s weekend record thus far to 3-1.

The Bison lost their final match of the weekend 9-6 to Marist. Entering the fourth quarter, the Bison trailed by only one goal. Within just under two minutes, the Red Foxes posted three goals against the Bison to put the match out of reach.

“This weekend was a great start to our season; it was a highly anticipated weekend because we had been practicing for so long. I think that the team played well together. We made a lot of mistakes but we now know exactly what we need to focus on in practice,” Sunday said.

After the opening weekend’s competition, the Bison will be back in action against Harvard and George Washington on March 2 and 3 .