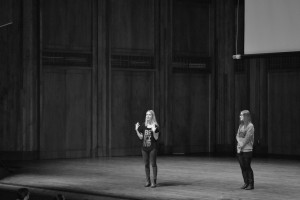 On Nov. 5, the Kind Campaign came to campus to talk to female students and other members of the larger community about abuse within the “girl world.” President and Co-founder Lauren Parsekian and Vice President and Co-founder Molly Thompson of the non-profit organization presented their cause, showed their documentary “Finding Nice” and facilitated conversation and activities after the film.

The documentary tells the story of how the Pepperdine University graduates set off on a tour around the country to interview both sexes about female bullying. They have now made three nation-wide tours in which they have visited schools to show their documentary and facilitate conversation between girls and women of different ages. The pair was inspired to spread awareness of the topic after they were both victims of bullying in middle and high school. 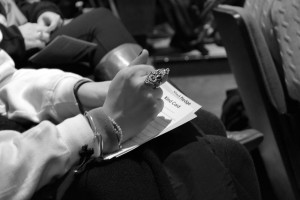 Ally Boni | The Bucknellian
Audience members had the opportunity to fill out Kind Cards with apologies, personal statements, and honest letters to other peers, family members, or friends.

The movement hopes to spread the sentiment that victims of bullying do not stand alone.  Their website, kindcampaign.com, spreads this sentiment and provides a forum where girls can anonymously share their struggles and seek support. The movement also spreads this message through several Kind Clubs across the nation, as well as a magazine and an online blog.

The most striking part of the night was seeing the “raw emotion of the girls who shared their stories” throughout the documentary, Mikaela Stein ’13 said. Cameron Berry ’13 was similarly surprised to see “the impact of mean girl-on-girl behavior on later stages of life.”

“You’d think that kind of behavior only exists in younger girls who haven’t fully matured, but now it’s obvious it exists in every stage of life, which is disheartening,” Berry said.

Both Stein and Berry believe meanness amongst girls is a problem on our campus. Lexie Leone ’14 and Sarah Remshifski ’14 shared the same sentiments, and said they will take action in their own sorority by “trying to make it more of a sisterhood with less cattiness.”

Thompson and Parsekian were both members of sororities at Pepperdine and felt their experience as Greek members was a positive one.

The campaign acknowledges that while we have all been victims to bullying, we have also been part of the cause. In honor of this, the event concluded by having audience members fill out the three cards in which they told the truth about an instance of bullying they were a part of, apologized for the incident and pledged not to bully or be a bystander to bullying.