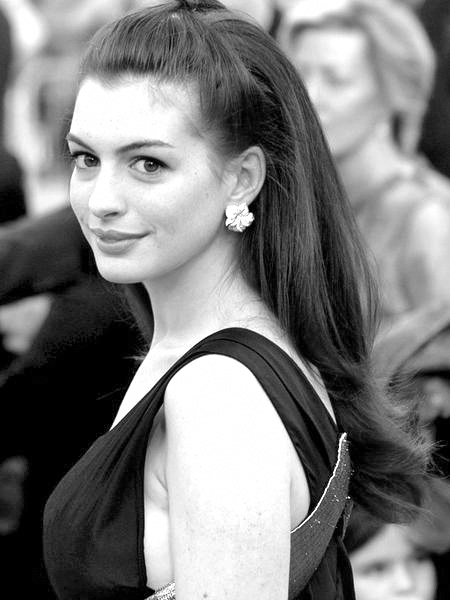 Courtesy of Wikimedia Commons
Anne Hathaway plays Fantine in an award winning performance in “Les Miserables”. She is the favorite for the Academy Award for Best Supporting Actress.

Director Tom Hooper’s follow-up to his 2010 Best Picture “The King’s Speech” is the monumental movie-musical “Les Misérables.” The film, based on Victor Hugo’s seminal 19th-century novel and stage megahit, stars Broadway darling Hugh Jackman and Anne Hathaway, both of whom were nominated as Best Actor and Supporting Actress, respectively.

France, 1815. The story centers on Jean Valjean (Jackman), a paroled convict who is the victim of the period’s inhumane system of justice, his only crime being the theft of a loaf of bread. Valjean, realizing he will never receive fair treatment as long as he wears the scarlet letter of his past, reverts to criminality, robbing a kindly bishop. Confronted with the bishop’s pardon of his crime, Valjean makes a pledge to live his life for God.

Skip ahead 10 years. Valjean, having abandoned his real identity, has become a business owner in and mayor of a prospering industrial town under the false identity of M. Madeleine. One of his employees, Fantine (Hathaway), has an “unsavory” secret: she is the mother of an illegitimate child. When this information becomes public, she is fired and eventually forced into prostitution to support herself and her daughter, Cosette. She is arrested for prostitution by the brutal police inspector, Javert (Russell Crowe), but is saved at the last minute by the intervention of Valjean. Javert recognizes Valjean from his time on the chain gang and vows to bring him to the justice he escaped years before. Meanwhile, the dying Fantine secures Valjean’s promise to raise her daughter, and Valjean is faced with the moral dilemma of accepting the punishment for his crime or supporting the people who most need his help.

Fast-forward again, to Paris in 1832. Valjean and his grown-up ward, Cosette (Amanda Seyfried), are living comfortably in Paris under false identities. Javert continues to search for his escapee, and rebellion is brewing. A group of students–the Friends of the ABC–are stirring up the unhappy people (the eponymous “miserable ones”) to fight for a new French Republic. One of the young insurrectionists, Marius (Eddie Redmayne), sees and is taken by Cosette, and their ensuing involvement pulls Valjean into the culminating action of the barricade on which lines are drawn, scores are settled and final stands are made.

Hooper’s big selling point for “Les Misérables” was a new technique of live recording the film’s musical numbers, allowing the actors greater freedom of expression than permitted within the original rigidity of the musical’s score. The technique is effective, although diehard fans of the musical will be in for some differences in adaptation.

Hathaway’s performance has been unilaterally praised, particularly her delivery of Fantine’s broken “I Dreamed a Dream.” Jackman is, as ever, a strong leading man and proves himself more than equal to the challenges presented by such a demanding score. Some moviegoers had complaints about some of the supporting cast, though.

“Seyfried’s paper-thin performance was saved by the strength of Hathaway and Jackman,” Liz Walker ’14.

On the whole, fan reactions have been quite positive, although many critics have censured Hooper’s over-the-top style in this film, compared to the quieter power of “The King’s Speech.” “Les Misérables” is an overwhelming, overblown musical extravaganza, in both a good and bad way. Sure, it’s completely romanticizing a generally unimportant installment in a long series of 19th-century student rebellions, and yes, it does tend to sentimentalize a genuinely miserable group of people, all through the lens of Hugo’s middle class morality. At the end of the day (a shameless “Les Mis” pun I just couldn’t resist), it’s really a pretty fantastic story, and that’s what draws people back to “Les Misérables again and again.