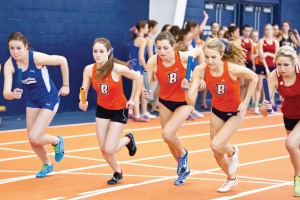 Edward Louie | The Bucknellian
Nora Adams ’16, Morgan Roche ’15 and Emily Wakmunski ’14 take off in the women’s 4×400 m relay at the Bucknell Winter Classic. The Bison won four gold medals, three of them by first years.

The Bison tasted a portion of their success in the field events. Monaghan won the weight throw event, posting a mark of 51-3. She broke the 50-foot barrier for the first time in the past three competitions.

In the pole vault, Emily Ando ’14 cleared 11-3.75, tying for first place. In the shot put event, Sophia Nnadi ’16 claimed victory with a mark of 43-10. This was the first time that Nnadi broke the 40-foot mark. This was also Nnadi’s first collegiate victory.

“This weekend was great for individuals, including myself, and for the team as a whole. I believe this was a high intensity meet because it was the last indoor meet for the seniors. Not only were the seniors high in spirits and putting all of their effort in their last throws, but all individuals were trying to accomplish their goals before the league meet. I definitely exceeded my goals and I’m super happy about that,” Nnadi said. “I look forward to competing in my first league meet this weekend and to finish my indoor season with the team.”

The Bison will be back in competition this weekend at the Patriot League Championships. They will defend their title on Army’s turf in West Point, N.Y. from Feb. 15–17.