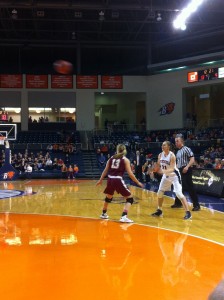 Heather Oros | The Bucknellian
Katherine Harris ’15 fakes out a defender. Her five points and five assists were not enough to overcome a furious Lafayette comeback.

The women’s basketball team had a solid start against Lafayette on Feb. 16, but the Leopards’ second half turnaround guided them to a 66-61 overtime victory over the Orange and Blue. After a low-scoring first half at Lehigh on Feb. 20, a late scoring run by the Mountain Hawks gave the Orange and Blue a 49-37 loss. The team is now 13-13 overall (4-7 in conference play) with three regular season games remaining.

Audrey Dotson ’15 scored nine points that led to a 13-9 start for the Bison. The Orange and Blue ended the half on a 20-5 run, leading to a 37-21 advantage at the break. Katherine Harris ’15 started the run with a jumper, while Lindsay Horbatuck’s ’13 free throw shooting and Shelby Romine’s ’14 two three-pointers cushioned the Bison lead.

The Leopards opened the second half with a 10-0 run. Dotson countered the blitz with back-to-back lay-ups to make it a 13-point game. Despite the effort, the Leopards scored 12 unanswered points. The Orange and Blue countered with a 6-0 run of their own and carried a 54-47 lead with 2:38 remaining.

“I think we went through too long of a scoring lull and allowed Lafayette to score the way they wanted to in the second half. They hit some important shots and made great plays and we needed to shut that down earlier in the half,” Dotson said.

Lafayette fouled Alyssa Dunn ’13 with seven seconds left in the game. She made one of two free throws to make it 55-53. Lafayette forced the game into overtime on a game-tying jump shot as time expired.

In overtime, Lafayette got its first lead of the game since the opening minutes of the game. The Bison were unable to regain the advantage, as they were outscored 11-6 in the extra period. Dotson led all scorers with 19 points. Romine was also in double figures with 11 points to go along with five assists.

Despite the Bison’s 16-point halftime lead, Lafayette’s 53.8 percent showing in the second half (14-26) propelled them to force overtime and claim the victory.

“The Lafayette game served as a reminder that the game isn’t over until the time runs out. In this league anybody can beat anybody and just because you have a lead doesn’t mean that the game is over,” Dotson said.

At Lehigh, the first half score was 18-8 in favor of the Mountain Hawks. The Bison offense was stronger in the second half, as they cut the lead to two with 4:31 left in the game. Unfortunately, Lehigh engineered a 12-2 run to steal the win. Romine led the Orange and Blue with 20 points, while Dotson scored 12 points and registered four blocks.

The Bison return to action on Saturday when they travel to Holy Cross before facing American in Washington, D.C. on Feb. 27.