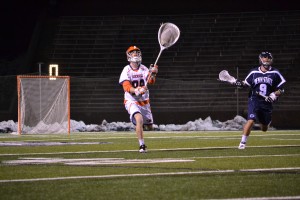 Ally Boni | The Bucknellian
Goalie Kyle Feeney ’13 clears the ball in a recent win. The Bison moved up in the national rankings from No. 16 to No. 6 this past week after beating No. 20 Albany and No. 2 Cornell.

Early in the first quarter against Albany, the Bison and Great Danes traded a pair of goals before the Bison added two straight to open up a 3-1 lead. Not to be outdone, Albany mounted a three-goal run over the final minutes of the first quarter and into the second, giving them the advantage. The Orange and Blue quickly responded with an equalizer, but red-hot Albany went back-to-back-to-back, increasing its lead to three goals.

In the early minutes of the second half, the teams brought the game to a 9-6 score in favor of the Great Danes, before Ryan Gutowski ’13 won the ensuing faceoff, rushed the ball down the field and scored his first goal of the season. This began an explosive 6-1 run for the Bison, that included two goals by Brock Ghelfi ’16 and single tallies from Thomas Flibotte ’16, David Dickson ’15 and Peter Burke ’14, giving the Orange and Blue a 12-10 advantage.

The Great Danes scored twice in the opening minute of the final period, in what would be their final goals of the game. Over the final 14 minutes, the Bison defense shut down Albany, as the offense opened up for another six-goal run.

The Orange and Blue were led by four-goal performances from Todd Heritage ’14 and Flibotte, in addition to a career-high seven-point effort by Dickson.

Following this decisive win, the Bison received a bump in the polls, moving up ten spots to No. 6/7, an all-time high. The Orange and Blue faced a quick turnaround as the No. 16/17 Penn State Nittany Lions visited Christy Mathewson-Memorial Stadium.

The two high-powered offenses were overshadowed by strong defensive performances in the first half, as the Bison were only able to capitalize on two extra-man opportunities while the visiting Nittany Lions found the back of the net three times to take a one-goal lead heading into the half.

Several minutes into the third quarter Ghelfi found the back of the net to tie the game at three goals apiece, in what would be the final Bison goal of the game. During the rest of the game, the Orange and Blue were completely shut down by the visiting defense. Heritage linked the offensive drought to Penn State’s style of defense in addition to an inability to execute their normal offensive play.

“We came out and didn’t run our offense exactly how we wanted to. Penn State runs a different defense than most we see during the season,” Heritage said.

At the same time, the opposing offense continued to fire on all cylinders, scoring eight straight goals. Team Captain Kyle Feeney ’13 was obviously disappointed with the team’s performance.

“We came out a little flat … we were in a position we had never been (No. 6 in the nation) and I unfortunately didn’t think we handled it well. We didn’t stay true to who we are as a team,” Feeney said.

Coming off the tough loss, the Bison look to rebound Saturday at 1 p.m. in a Patriot League matchup against Holy Cross at home.