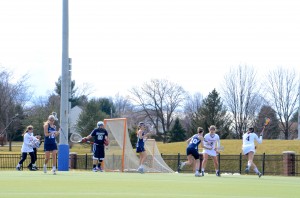 Heather Oros | The Bucknellian
No. 4 Madison Hurwitz ’13 drives to the goal. The Bison split games this past weekend, losing 13-8 to Lafayette then rebounding in their next match with a 17-9 win over St. Bonaventure.

The women’s lacrosse team began its week with a 13-8 home loss against Lafayette on April 6, but bounced back behind a career-high seven-goal performance by Madison Hurwitz ’13 to defeat St. Bonaventure 17-9 on April 9.

Sam Rickels ’16 posted the first goal of the game against the Leopards off of a free position shot. Lafayette traded goals with the Orange and Blue in the early minutes, as Cori Thielemann ’15 evened the score at three apiece. Unfortunately for the Bison, the Leopards closed the half on a 4-0 run.

Ryan Wenk ’13 ended the Bison scoring drought with a tally at the 20:07 mark followed by an Adrienne Wendling ’13 goal two minutes later off an assist from Wenk. But that would be as close as the Bison would get, as the Leopards scored three unanswered goals to make it a seven-goal deficit for the Bison, and put the game out of reach.

Despite the loss, Caroline Collins ’15 had a solid game with three caused turnovers, two ground balls and two draw controls.

It was a better result against St. Bonaventure, as Katelyn Miller ’14 and Hurwitz accounted for 12 of the Bison’s 17 goals en route to their third victory of the season. The Bison went on a couple of 4-0 runs to lead 9-3 at the half, while holding a 20-5 shot advantage. Miller dished out three assists and scored three goals in the half.

“In our game on Saturday (Lafayette), we struggled with a lot of offensive turnovers due to a lack of focus, but we definitely cleaned that up a lot for St. Bonaventure and it really showed in the score,” Miller said.

The Orange and Blue continued to shine in the second half, adding another eight tallies. Hurwitz, Miller and Rickels were part of another 4-0 run, ending a terrific offensive night for the Bison.

Thielemann, Sophie Kleinert ’14 and Blair McDonald ’15 each scored a goal in the win. Miller’s five goals brought her to the 30-goal mark for the second straight season. Wendling finished with seven ground balls, one away from the program’s single-game record. In addition, Miller recorded a career-best nine points in the victory.

The Bison will host Senior Day against Holy Cross Saturday at 1 p.m. at Graham Field. Hurwitz, Wendling and Wenk will all be recognized before the game.

“I am very proud about leaving the program in better standing for the future than when I joined and am really excited about continuing to end the season very strong both personally and as a team, hopefully getting our first Patriot League win this Saturday,” Hurwitz said.