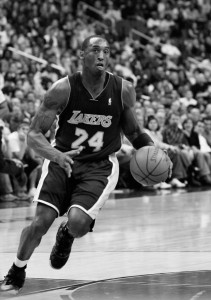 Courtesy of Wikimedia Commons
Kobe Bryant suffered a torn achilles heel, and his future in the NBA is cloudy at best.

Father Time caught up with Kobe Bryant in a big way. All it took was one wrong step and a hollow pop.

The greatest player of the post-Jordan era (LeBron James is still too young for this distinction) has put on a stupendous show year-in-and-year out. Despite all the mileage on Kobe’s 34-year old engine, he has defied all odds by improbably dominating with each passing year. But unfortunately, one bad break can bring any string of success to a screeching halt.

In a must-win game for the Lakers against Golden State, Kobe had the ball at the top of key and preceded to “make a move I’ve made a million times,” as he put it. In catastrophic fashion, he planted his foot as his body’s momentum moved forward in a force that no human leg is meant to sustain. He lost all sensation in his foot and he knew that what had just happened was a disaster.

A torn Achilles can be a death toll for any athlete, let alone an athlete on the wrong side of 30. The injury takes six to nine months to heal after surgery, and for those players who are lucky enough to regain their “explosion” after healing, it takes another year to do so. Unfortunately, many players never regain that explosion at all. In basketball, where so many players rely on the “first step,” the ability to shift direction laterally, and vertical athleticism, Achilles tears are the very worst injuries they can sustain. It’s no coincidence that Achilles tears effectively ended the careers of great players like Charles Barkley, Isiah Thomas, and Shaquille O’Neal.

Bryant may never regain the form he boasted for so many years—and if so, the final storm that will wash away what’s left of his career may be on the horizon. It’s sad when you think about it. Kobe’s legacy includes five championships, an MVP, scoring titles and legendary status in the history books of one of the NBA’s most prestigious franchises.

It was just getting to the point where I was going to drop the whole “how much does Kobe have left?” argument. The performances he was giving featured no evidence of physical decline whatsoever and his confident and borderline arrogant swagger (which is well-earned) seemed to indicate that his great play and, ultimately, his career would end on his terms. How naive I was to think that a human being could actually make that determination. Even Jordan had declined when he stepped away for the last time in 2003, and he played in even fewer games than Kobe has to this point.

We’ll have to see how a determined Bryant returns from this injury, but despite my belief in his talent and confidence, I’m not hopeful that we’ll ever see the Kobe Bryant we’ve seen for the last 15 years again. It was perhaps the harshest way he could have reminded us, but Father Time had to let the sporting world know that no one, not even Kobe, can remain undefeated forever.