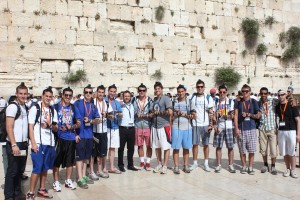 I went to Israel this summer for the first time on a Birthright trip through a program called Mayanot. It was truly a wonderful experience to get to see everything that I have learned about Israel come to life.

I signed up with a friend from my high school, and was lucky enough to be on the same trip with my fraternity brother, Dan Gelbard ’13. It was very refreshing to have a familiar face on the trip, and we ultimately represented our fraternity and the University. There were 40 people on our trip, including people from New York, Georgia, California, London and many other places across the globe. Our trip leader was a Harvard student and we also had three Israeli leaders, all of whom were instrumental in giving us all the knowledge and help we would need during our journey.

The teaching component of our trip started the minute we arrived at the airport. The leaders gave us basic information about Israel and what to expect for the next few days. Twelve hours later, we arrived in Israel and began the journey of a lifetime. The leaders emphasized the importance of learning about our ancestors, as well as traditions of the modern Israeli people, while on the trip. I kept this in the back of my mind as I began my journey through Israel. We were lucky enough to see great sites, including Ein Gedi, a waterfall in an oasis in the middle of the desert.

Two particular events of the trip stand out to me. The first was meeting a man named Avraham in a small town called Tzfat, which is known for its spiritual nature. A lot of the people there practice Kabbalah, work and live there. Avraham, originally from Detroit, moved to Tzfat in his 20s after he started reading and learning about Kabbalah. The study of Kabbalah inspired him to drop everything he had in America and come to Israel to further his studies. Now, he makes paintings with verses of the Torah imprinted on it, as well as images expressing his own interpretation of a person’s name. I have never met someone who was so happy and content with life. He was very relaxed and satisfied with where his life had brought him, and he taught me to be happy with what I have in life and who I am.

The most meaningful part of my trip was when we stayed in Jerusalem for Shabbat. We were lucky enough to go the Western Wall on Friday night and experience Shabbat with the rest of Israel. I had never felt such a strong connection to my Jewish culture than I did on that day; I had never seen so many people brought together for one common reason. Although it may seem, from the outside, that a visit to the Western Wall is a quiet, individualized moment, there is actually a sense of inescapable community when you are there. Prayers are done both within yourself and with everyone around you. People are singing, dancing and praying all around, and there is always someone to put their arms around you and invite you to join them in their time of prayer. It was at this time that I really grasped the importance of the Birthright trip.

If I hadn’t gone on this trip, I never would have understood the emotional tie associated with being Jewish. Before this trip, Judaism was never a personal connection, but rather a label or something I would bring up to a friend in passing. This trip made me realize that there is a whole group of Jewish people that have overcome obstacles and dangers, creating the strong group of people we are today. Going to Israel gave me a greater appreciation for the Jewish religion. For thousands of years, people have tried to take Israel from the Jews, and every time they have failed. It is important to understand the significance of Israel, and that it is the one place that every Jewish person has in common as a point of righteousness.