Bucknell Student Government’s Committee for Student Engagement (CSE) released an online survey Monday, April 18 at midnight in the hopes of revealing students’ opinions and thoughts on various aspects of the University in order to serve students better.

The short survey of 14 questions is open-ended with dialogue boxes for students to fill in their own answers to the questions.

“[We] want to hear exactly what students have to say—we don’t want to cookie-cutter their answers,” Mike McGowan ’12 said.

The committee itself is ad hoc at the moment but is hoping to become a permanent part of BSG. It is currently made up of BSG members and other students, but these include student athletes, club presidents, Residential College members and students representing each class year.

“[This is the] first time BSG has ever asked these types of questions in a campus-wide survey. We’re making a huge push for students to respond because that’s what dictates where our committee goes and what issues we need to deal with first,” said Phil Kim ’12, President of BSG and chair of the CSE committee.

The survey asks for opinions on all aspects of student life: residential, academic and social. It also asks questions about how available students find resources on campus and allows space for writing about specific personal experiences.

The CSE reached out to many different administrators and faculty about the survey to get feedback on the questions and structure. The CSE also used the National Survey on Student Engagement (NSSE) as a platform for what they should explore and which ideas they wanted to look into.

“I hope that a lot students will respond and care about BSG wanting to make a difference, and we’re really just trying to reach out more as a student government,” BSG representative Caroline Coady ’12 said.

The committee’s biggest intention with the survey is to get the point across that the BSG needs thorough student feedback to most effectively serve the students.

Advertisements went up Tuesday morning and can be seen along with sidewalk chalk all over campus. BSG also hopes to spread the word through RAs, class presidents, table tents and the Message Center.

“[I’m on CSE] in hopes that I would better server the student body in a way that would unify student concern and bring about effect changes,” Rob McFeeters ’11 said.

The survey, available on myBucknell, will stay up until the last day of classes, May 3. 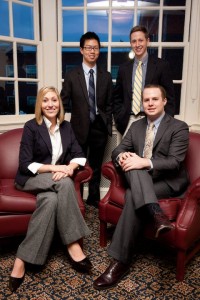 The Executive Board of the Bucknell Student Government (BSG) is kicking off a new year with four new board members.

The new board will serve as administrators of all BSG representatives and activities for the next calendar year.

“Our primary role is to voice the concerns of the student body, to act as a sounding board for students on campus and to act as a liaison between faculty and students,” President Phil Kim ’12 said.

Abby Vidmer ’13 is the newest member to the BSG and serves as the Vice President of Administration, working to make the efforts of the BSG more transparent to the student body, keeping track of attendance at meetings, and taking minutes at congress.

The main concern of the Executive Board is to “make sure that the organization is running at the best that it can be,” Martin said.

“The executive board positions demand a significant commitment, and students really must put extra effort into maintaining a good balance between academics and their BSG role,” said Associate Dean Kari Conrad, faculty adviser for the BSG. “Most are in the position because they are passionate about Bucknell and want to make a difference.”

Conrad considers her position as adviser “incredibly rewarding” and said that in her 11 years as adviser, she has been increasingly impressed by the quality of the students who take on the leadership roles within the Executive Board.

Since this new board is starting half way through the year, their job is to keep the work of past executive boards consistent through the next year. The new board’s first and foremost initiative is to re-evaluate BSG by further defining its purpose and function, as well as what its members want to achieve.

One of their goals is split into two major parts. The first is to incorporate outside opinion into the BSG in an effort to better understand what students are thinking. Gathering student opinion is helping them to engage the students at large.

“We think that it is a phenomenal way to reach out to students and get a good understanding of what they’re thinking, so that when we make a decision, we’re making better-informed ones,” Kim said.

Their plans for engaging student involvement are to use surveys, hold discussion groups, and to have BSG members approach students for face-to-face connections. The latter also relates to the second piece of their other goal for the upcoming year.

The second part is to make their work and efforts more transparent to the student body. Most students are probably unaware that certain programs such as ZipCar, the Café in the library and the new equipment in the gym are brought to them by the BSG. The Executive Board hopes to increase awareness from their attractive new office space.

The group feels that their new location across from the Bison Café will make them more accessible to students.

“We want you guys to know that we’re working for you and want to have your opinions coming through the door,” Kim said.

They also hope to update their page on the University’s website.

“[We are working on] finding someone to work with us on it to make it more informative with our updates on events or goals,” Vidmer said. Any and all aspiring web designers interested in helping should contact Vidmer.

“In every corner of Bucknell, BSG has some involvement, and we want to make it clear that we are here if any student wants to talk about anything or voice any concerns. We’re looking for that kind of feedback,” Kim and Martin said.

The Executive Board members invite all students to come by their door and say hello or voice a concern or an idea since they will be considering your concerns and opinions for the next calendar year.

After signing up for membership online and paying a fee, students will be able to use the environmentally-friendly cars wherever they wish for an unlimited time.

“Pending the general council’s approval, Bucknell will become one of the many universities providing this service,” said Glenn Fisher, a member of the transportation department. The University has yet to execute the contract, but BSG has been working to ensure the contract is finalized in the next few weeks and be in place by August. Ali Jones ’11, former BSG vice president of operations, initially introduced the idea of bringing Zipcar to campus.

“We worked extensively with Zipcar and the University to prepare this program and hope that the campus community will embrace it in the coming academic year,” said Michelle Beck ’11, current vice president of operations.

The recently-internationalized company is the largest car-sharing service to date with 6,000 vehicles shared in 67 cities and metros in the United States, Canada and the United Kingdom.

Students, faculty and staff can join Zipcar services for a $35 fee. A $35 free driving credit will be applied to all accounts for the first month.

The weekday rates for these cars are $8 hourly and $66 daily. Weekend rates are slightly higher.

Each Zipcar reservation includes gas expenses, insurance, 24-hour roadside assistance and 180 miles of free driving. The Zipcars will be available 24/7 and can be easily reserved online, over the phone or with smartphone applications.

Zipcar is appealing to college campuses because a person only needs to be 18 years old to be eligible to drive one. International students will also be able to access the vehicles without a U.S. driver’s license.

“We are especially excited to cater to first-year and other students who are not able to have vehicles on campus and hope that students may even consider leaving their cars at home. This program has the potential to greatly alleviate our obvious parking problems, as well as to reduce Bucknell’s carbon footprint,” Beck said.