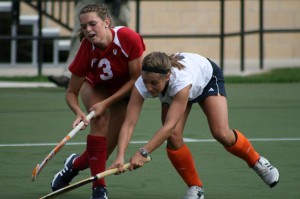 The field hockey team finished its home stand with consecutive stroke-outs, defeating Sacred Heart 4-3 on Saturday afternoon and losing to Indiana 2-1 on Sunday.

Tough defensive play from the Bison held the Pioneers scoreless during the first 40 minutes of play. Offensively, the Bison dominated Sacred Heart in the first half, outshooting the Pioneers 13-3. Morgan Kauffman ’11 and Tayler Siegrist ’13 each netted a first-half goal, sending the Bison into halftime with a two-goal lead.

The Pioneers came out attacking in the second half. Less than 10 minutes into the second frame, Sacred Heart netted two goals and tied the score.

Rachel Misko ’14 responded with a goal, lifting the Bison up 3-2, but the Pioneers knotted the score at three with less than a minute to go, sending the game into overtime.

Impressive defensive performances from both teams resulted in a stroke out. Corinne Raczek ’11, Siegrist and Christine Weiss ’11 each scored in the stroke off, and, thanks to a pair of saves by Sarah Zagarapour ’12, the Bison claimed a much-deserved win.

After playing 100 minutes of hockey Saturday, the team had minimal recovery time before Sunday’s Big Ten match up.

“Going into the weekend, we tried to focus on working together as a team and not individuals, and I think we did that successfully both days,” Vicki Resh ’14 said. “We also knew that after playing two overtime periods and going into strokes on Saturday, Indiana was going to be tough … although the outcome wasn’t quite what we had hoped for, we can proud of our performance.”

Sunday’s game against Indiana was another tight one for the Bison. After a scoreless first half, the Bison went up 1-0 when Rachel Misko ’14 scored the first goal of the game and her fourth of the season. Misko’s goal was assisted by Kelly Bruvik ’11 off a Bison penalty corner. The Bison held their lead for almost 20 minutes until Indiana’s Lena Grote tied the score.

After the Bison and Hoosiers played two scoreless periods of overtime, the Bison faced their second stroke out in two days. The Hoosiers connected on seven out of nine strokes to defeat the Bison’s six out of nine.

Despite the close loss on Sunday, the team had a positive reaction to its play at Graham Field.

“I think we proved how competitive we can be with a Big Ten school, even after playing a lot of extra minutes of hockey the day before,” Weiss said. “We played some really great hockey this past weekend and should have a lot of confidence going into our first round of Patriot League competition.”

On Saturday, the Orange and Blue travel to Worcester, Mass. to take on Holy Cross and open Patriot League play. On Sunday, the Bison travel to Cambridge to play Harvard.

The field hockey team clenched its first victory this season and established a two-game winning streak in a pair of home games this week. The Bison field hockey team shut out Cornell on Saturday and Towson on Sunday with scores of 3-0 and 4-0, respectively.

Earning their first win against the Big Red, the Bison got off to a tremendous start when Rachel Misko ’14 netted her first career goal less than three minutes into the game.

About 10 minutes later, co-captain Kelly Bruvik ’11 scored an unassisted goal, propelling the Bison to a two goal lead. With this impressive score, Bruvik tallied her 18th career goal, putting her into a tie for 13th-place on the all-time career goals scored in program history.

Bruvik reflected on the victory compared to the team’s previous losses.

“The Cornell game was different in that we collectively played great hockey for an entire 70 minutes. For the first time this season, we really focused on our own offensive and defensive goals instead of adjusting our style of play based on our opponent,” she said.

Unrelenting despite their two-goal lead, the Orange and Blue drew a corner with five seconds remaining in the first half. Christine Weiss ’11 executed the penalty corner and scored, sending the Bison into halftime with momentum that carried them into a strong second half. Weiss’ goal was assisted by Mallory Smith ’12 and Corinne Raczek ’11, who is now three assists away from tying the school record for career assists, currently held by Amanda Faust ’09.

Bison defense shut down the Big Red’s efforts in the second half. Goalkeeper Sarah Zargarpour ’12 counted six saves on the game.

“Our mentality going into the Cornell game was to make a statement about who we are and what we can do on the field and as a team,” Zargarpour said. Their statement extended into Sunday’s competition, when Zargarpour and the Bison defense kept the Towson Tigers scoreless.

Offensively, Morgan Kauffman ’11 led the way for the Bison on Sunday, scoring two goals against Towson in the first half. Her first came about 15 minutes into the game, on a Bison breakaway and an assist from Bruvik.

“The momentum from the Cornell game undoubtedly carried over into the win [Sunday]” Bruvik said.

Continuing her scoring streak from Saturday, Bruvik scored a goal in the second half of Sunday’s game, along with teammate Tayler Siegrist ’13. Siegrist’s goal, her second of the season, and the fourth Bison goal of the game, forced Towson to pull their starting goalie from the match.

The Orange and Blue continue their home stand this weekend, facing Sacred Heart on Saturday and Indiana on Sunday. Both games will start at 1 p.m. at Graham Field.

The Bison field hockey team faced another weekend of stiff competition as the women fell to Albany 3-2 and No. 4 Princeton 7-0.

At this weekend’s first home game, the Bison conceded two early goals to Albany. Daphne Voormolen led Albany to victory. Her hat trick was the only offense the Great Danes could offer.

Morgan Kauffman ’11 closed the gap to a single goal with 11:20 left in the first half, registering her first goal of the season.

“We know what we have to do now in order to win, it’s just going to come down to executing,” Kauffman said.

In the second half, Voormolen continued her success as she scored her third and final goal of the day off a rebound from one of her teammates.

The Bison then pulled within one goal as Marci Richard ’12 tipped in a shot from Tayler Seigrist ’13.

The Orange and Blue continued the pressure all the way to the final horn but failed to score a tying goal, falling 3-2.

“Albany was a tough one; we felt like we made some serious progress in our defensive decision making and put a ton of pressure on them offensively, just came up a bit short in the end,” Head Coach Jeremy Cook said.

Against Princeton on Sunday, the Bison faced one of the nation’s best as they were only allowed three shots in the contest. Sarah Zargarpour ’12 made nine saves but was unable to silence the punishing Tiger attack.

Two seniors led the offensive charge for the Bison as Kelly Bruvik ’11 and Christine Weiss ’11 respectively attempted one and two shots on goal.

The women will return home for a five-game series where they will host Cornell, Towson and Lock Haven over the next 10 days.

“The home games coming up should be a blast. Graham Field is a fantastic venue, and the team has had some really memorable performances there,” Cook said.