After falling behind just three minutes into the contest, the women’s soccer team could not overcome the early deficit in a league-opening loss at Colgate this past week. The Bison defense surrendered 21 total shots, with 11 hitting the target. Despite surrendering three goals, goalkeeper Sandita McDermott ’13 finished with seven saves.

After their early goal, the Raiders added two more goals before the end of the first half to gain a three-goal lead. The Bison had some opportunities on corner kicks in the first half, but for the rest of the game, the offense was almost completely shut down.

“We gave up two goals early and that really hurt us,” defender Meghan Fitzpatrick ’13 said. “We still created a lot of opportunities for ourselves as we got behind their defense throughout the game, but couldn’t find a way to capitalize.”

Overall, the Bison were outshot 21-6 and had three shots on goal.  Midfielder Taryn Boucher ’13 was the only Bison to record multiple shots, ending the contest with two.

“I think [Saturday’s] game reminded us both of the type of competition we face in league and of the effort and level of play that we need to bring every time we step on the field during the remainder of the season,” forward Megan DeGennaro ’12 said.

The Bison will continue their four-game road stretch with two games against Patriot League rivals Holy Cross and Army today and Sunday, respectively.

“There were some things we need to change and others that we executed well and will bring with us as we continue in league play against Holy Cross, and then Army and beyond,” DeGennaro said.

Sitting with a 0-1 league record, the Bison cannot afford to drop both upcoming contests if they hope to stay in contention.

“Getting any points on the road is a challenge,” Fitzpatrick said. “We will look to focus on keeping a shutout and finding a way to score goals.” 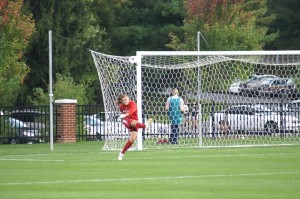 The women’s soccer team suffered two tough losses at home this week, losing to Cornell 2-0 Sunday and to Mount St. Mary’s 3-0 on Wednesday.

The Bison and the Big Red traded blows in the first half but neither scored. The Ivy League school decided to quicken the pace in the second half, but Colleen Garrehy ’12 made three saves to preserve the stalemate.

Cornell scored at the 57:17 mark as a midfielder ripped a shot past Garrehy. The Bison almost equalized later in the half when Liz Dwornik ’14 found open space in the penalty area but Cornell’s goalie made a save to deter the effort.

Although Cornell scored again in the 71st minute, the Bison kept battling. Kelliann Doherty ’11 was robbed by the Cornell goalie with less than nine minutes to play as a lunging save preserved the shutout for the Bison.

“We are still not fully healthy, but when our team gets up to full speed we should be quite a force,” Doherty said.

In the game against Mount St Mary’s the Bison punished their opponent with 21 shots. The Mount goalkeeper was stalwart, making eight saves to secure the shutout for the visiting team.

In the first half the Bison played to a 0-0 score but controlled the pace most of the time. Mount St. Mary’s played an extremely physical game, with 18 fouls called against them compared to the Bison’s four.

In the second half Mount St. Mary’s exploded for a flurry of goals beginning in the 58th minute. By the time the home team had a chance to look up, Mount St. Mary’s had tacked on three goals in 10 minutes. The Bison dropped the contest 3-0.

The Bison will have one more weekend of non-Patriot League action as they play Marist and Iona before they begin their quest for a league title.

“We are very optimistic going into the Patriot League and we know that these games will help us be great in the long run,” Jules Harris ’11 said.

It was a tough week for the women’s soccer team, which dropped a 2-1 decision at St. Francis in overtime Friday and lost at Penn State 5-1 Wednesday.

Against St. Francis, Christa Matlack ’11 scored just five minutes into the game. This did not deter the Red Flash, who were able to equalize the score just 10 minutes later at 1-1.

Goalie Sandita McDermott ’13 finished with seven saves. Casey Crowley ’12 also cleared a ball that was resting on the line.

In overtime, Kelliann Doherty ’11 rocketed a shot wide of the goal. At the 3:08 mark in sudden death, St. Francis rocketed a shot into the upper right side. After a hard-fought battle, the Orange and Blue had to swallow a tough 2-1 loss.

In the first half of the Penn State game, the Bison were able to keep pace with the Big Ten powerhouse school. In the 24th minute Penn State jumped to a 1-0 lead.

In the second half, the Bison were unable to contain the Penn State attack as they scored three goals in 11 minutes. Matlack attempted to bring the Bison back into the game with a goal in the 70th minute.

The Nittany Lions sealed the game five minutes later as they scored their fifth goal of the game to bring the score to 5-1. “These games have really showed us where we need to grow as a team. I am confident that the lessons we learn will come forward during the rest of the season,” Doherty said.

“We are gearing up for the remainder of the season and we are certain that we will bring 100 percent to the rest of our games,” Jules Harris ’11 said.

The Bison will be in action next for two home games against Mt. St Mary’s and Cornell.