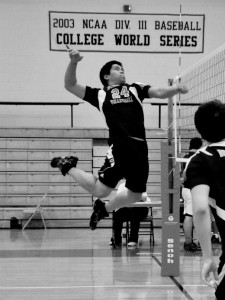 The men’s club volleyball team finished off an impressive 2012 season tying for ninth-place  at the National Collegiate Club Volleyball Division II National Championships. The Bison began the season with the simple hope of rebuilding and developing a competitive squad. As the season progressed, the Orange and Blue realized their competitive potential and became a force to be reckoned with in the Mid-Atlantic Collegiate Volleyball Conference (MACVC). I recently spoke with Shane Kiefer ’14, president of the men’s club volleyball team. The following is the conversation we had about the team’s success at Nationals this year:

Q: What were the team’s expectations going in to the season?

A: In terms of our expectations this year, we really didn’t expect to do as well as we did, mainly just because we basically didn’t have a competitive team the past few years. This was the first year in a while that we were able to pay our dues to join the MAC Conference, and after we did that, I was able to start scheduling matches as well as enter us in tournaments. I think a lot of us were just happy that we were actually taking the necessary steps to becoming competitive again.

Q: How often was the team able to hold team practices this season?

A: It was difficult to get practice time this season with varsity sports and intramurals often taking precedence over athletic space, but we usually practiced two times per week on average. Most of the time, it was a late time slot such as 9-11 p.m. If we didn’t have a tournament or match on the weekends, we would usually practice Saturday afternoons as well.

Q: What would you say was the team’s best win of the season?

A: It’s difficult to attribute a specific match as being our best win of the season, but I would have to say that our match against No. 21 Missouri S&T on the second day at Nationals was our best win. We came into the match knowing that if we lost, the highest place we could take at Nationals was 25th, but if we won we couldn’t finish lower than 24th in the nation. It was basically a make or break match for our season, and we came out and got crushed in the first set 25-13 and were down 15-7 in the second set. We ended up making an amazing comeback to win that set, and later finished by winning the final set tiebreak 15-11. We all agreed after the match that it was the best we had ever played, and at the end of the tournament, we had some evidence of that, as Missouri S&T finished by winning the Consolation bracket. In our next match against the No. 6 team in the nation (Adrian U.), we came out and dominated against a great team so I think that the confidence we got from that comeback played a big part in that.

Q: What does a ninth-place finish at Nationals mean for the men’s club volleyball team?

A: We were extremely pleased with our ninth-place finish at Nationals, and I think that our strong finish this year will carry right over into our season next year, since we only lose one senior from the Nationals squad to graduation. We’re already looking forward to making a return trip to Nationals again next year, and I think that our ninth-place finish in the nation this year gave us the confidence that we needed to believe in our abilities and continue making progress as a team.

Q: What do you think the future has in store for the men’s club volleyball team?

A: We definitely believe that we can have an even better season next year and even in years to come after that, as we have a very young team and I have already talked with multiple incoming freshmen who are looking to come in and make a difference next year. Overall, we’re just grateful for the support that we’ve seen from alumni and we’re definitely ready to continue making strides towards leaving a lasting legacy and tradition here on campus after we’re gone. And who knows, maybe bringing home a National Championship is in our future.