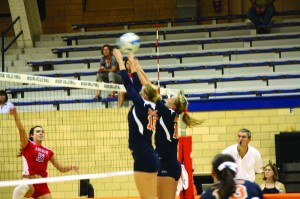 The women’s volleyball team finished its non-league schedule poorly this weekend, losing three matches by a combined score of 9-1 in the Columbia Classic in New York.

The Bison lost their first match of the tournament on Friday against Fairleigh Dickinson. They dropped the remaining two matches on Saturday, losing to Columbia and Fordham. The Bison won one game against Fordham.

“Although we didn’t pull out a win, we still had moments of awesome volleyball—we just weren’t able to string points together,” Heidi Kamp ’11 said.

Ragin Jackson ’11 was named to the All-Tournament Team for the second week in a row. The middle hitter recorded 16 kills and 11 blocks in her three games. Coming into the weekend Jackson had a hitting percentage of .291, high enough to rank fourth in the Patriot League.

The team’s best hope for a win came in the final match of the tournament against 8-7 Fordham. The first set featured 60 hard-fought points, but the Orange and Blue finally came out on top, 31-29. But the Bison failed to capitalize on their momentum. Fordham regrouped and won the next three sets consecutively.

The other two matches were less competitive. Against Columbia, the Bison hit a staggeringly low percentage of .019, after hitting .110 against Fairleigh Dickinson. Columbia out-hit the Bison by over .150 points, and the knights of FDU posted a hitting percentage that was .200 points better.

In the end, this weekend should only help the team, which starts its Patriot League schedule today. The team’s non-league schedule has been unusually tough; this weekend’s opponents had an overall record of 19-17.

Although the Bison have not found success thus far, the team remains optimistic.

“This weekend was another learning experience for the team. Although the results didn’t show it, the team has made strides… We all need to realize the potential and talent we have and start executing our skills in order to be on our way to a Patriot League Championship,” Kat Tauscher ’13 said.

The women’s volleyball team played three matches at the Niagara/Canisius Invitational this past weekend, winning against Canisius but losing against Indiana and Niagara.

The team struggled even more against Indiana. The Bison failed to score more than 18 points in any set and was out-hit .271 to .013. “The Indiana match was a tough loss, the energy was definitely not there, and we lost focus,” Mientus said. Indiana came into the tournament with a perfect 6-0 record.

The highlight of the tournament came against Canisius in a 3-1 victory. The Bison came out strong, taking the first set 25-22. After losing an extremely close second set, the team took off, winning the following two sets for its second victory. This turnout was the Bison’s “most solid match of the season,” Mientus said.

Even with a record of 2-7, the team still believes it can turn things around.

The team will need Jackson’s help again this weekend to perform well at the Columbia Classic, where they will play Columbia, Fordham and Fairleigh Dickinson.

The women’s volleyball team came from behind to win its first match of the season, defeating Providence in five sets in the final match of the Bison Open. Kyleigh McAhren ’12 had 18 kills and Rachel Rodriguez ’11 had 30 assists for the Bison, who snapped a 12-match losing streak dating back to last season.

“We have had a tough preseason schedule so far, and although our record might not show it, we have become a stronger team in just these past two weeks of tournaments and practices,” McAhren said.

After the Bison dropped the second and third sets and fell behind 13-4 in the fourth, a kill by McAhren sparked a rally. With three kills by Katie Baumgarten ’12, the Orange and Blue went on a 9-1 run to climb back within one.

After Providence widened its lead to 18-14, the Bison scored seven straight, including three kills by Rodriguez, to take a 21-18 lead. The Orange and Blue won the set 25-20.
Providence opened the fifth with a 9-5 lead, and once again the Orange and Blue had to fight to come from behind.

Down 13-9, the Bison forced four straight errors to even the score. After the two teams traded kills, Anne Ellenberger ’12 scored to give the Orange and Blue the lead for good. The Bison won the set 16-14.

Heidi Kamp  ’11 was named to the All-Tournament Team for the second straight weekend.

“We learned how to play better together as the weekend went on,” McAhren said. “This weekend started out with a couple of losses, but we ended on a positive note, giving us the confidence we need to win at this weekend’s tournament in Niagara.”

The Bison, now 1-5, will take on Niagara, Canisius and Indiana this weekend in the Niagara/Canisius Invitational.

The volleyball team lost three matches in straight sets at the Trojan Invitational last weekend in Los Angeles, Calif. The Orange and Blue struggled to get any momentum going against quality competition.

Against Loyola Marymount on Saturday, each set started out close, but each time the Bison eventually fell behind and allowed the Lions to build commanding leads. Loyola Marymount beat the Orange and Blue 25-17 in the first set, 25-16 in the second, and 25-15 in the third. The Lions recorded a total of 44 kills compared to 20 for the Bison.

Earlier in the day, the Orange and Blue could not keep up with No. 10 USC, falling 25-7, 25-18, and 25-13. The Trojans jumped on the Bison from the very beginning, getting off to a 13-2 lead in the first set. The second set was closer as the Orange and Blue prevented the Trojans from going on any extended runs. The Bison battled back from a 20-14 deficit to a 21-18 gap, but USC closed out the set with four straight points. The Trojans continued this run into the third set, getting off to an 8-0 lead from which the Bison could not come back.

The Bison also failed to get off the ground in their season opener against Cal State Fullerton Friday, losing 25-16, 25-11, and 25-15. Fullerton opened up large early leads in the first two sets, but even when the Bison stayed close early in the third set, they allowed several large runs to prevent victory.

Low attack percentages plagued the Bison all weekend. Out of its nine sets, the team’s top percentage was .115, and the team played four sets with either a negative percentage or zero. The team’s opponents only recorded one set below .200.

Heidi Kamp ’11 was named to the All-Tournament Team.

The Bison will try to turn things around in the Bucknell Invitational this weekend. The team will face Eastern Michigan at 7:30 p.m. tonight before taking on Iona at 12 p.m. and Providence at 5 p.m. Saturday. The Orange and Blue hope that home-court advantage will help them to their first win of the season.