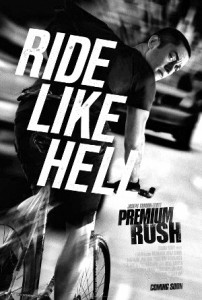 Joseph Gordon-Levitt stars as Wilee, an Ivy League law school grad who is putting his diploma to good use by delivering messages up and down the city as a bike messenger. This character, though perfectly likable, has a death wish; here he is whipping along lanes of traffic all day, on a bike with no gears or brakes. He and his girlfriend, Vanessa (Dania Ramirez), and their goofy sidekick of sorts (Wole Parks) are portrayed here as enlightened anti-corporate thrill-seekers. They are called to the siren song of high speed cycling through obstacles and thinking their way around corners, all while engaging in friendly banter and/or casual lovers’ spats, until the plot intervenes.

A dirty cop named Detective Monday (Michael Shannon) has a little bit of a gambling problem, and things go from bad to worse. After taking a beating from some Asian toughs for coming up short, he receives a tip about a sure way to make up his end of the bargain by the appointed time, if he’s willing to bend the law a little bit and intercept a package on its way to Chinatown.

Enter Nima (Jamie Chung), Vanessa’s roommate, who has gotten mixed up in some kind of dirty dealings in the Asian underworld. Don’t worry, we quickly learn the reason: she’s trying to bring her son into America after working three jobs for two years while attending Columbia to raise the money. She knows Wilee’s the best messenger in the biz, so she requests him to carry this sensitive package. He’s subsequently less than pleased to find himself being chased by Monday all over New York, but the truth of Nima’s package is revealed. Naturally, once they understand that they’re fighting for the “American Dream,” Wilee’s crew springs into action, leading to a series of dizzying bike chases and narrow escapes–a culminating and predictable ending for this sort of a movie.

“Premium Rush” isn’t a bad movie by any means. It has a good cast (with the exception of Shannon reprising his role as the crazy guy from “Revolutionary Road”, except it doesn’t make as much sense here) and a good director who knows what he’s doing as far as action movies go. If you’re looking for something deep, this isn’t it. Minimal character development and a general adherence to the action-film playbook hurt “Premium Rush,” even if it does have some excellent action scenes. Between “The Dark Knight Rises”, this weekend’s “Looper” and the upcoming biopic “Lincoln,” Gordon-Levitt clearly has been very busy, and though we’ll hope the next two films are better, “Premium Rush” will do for now.