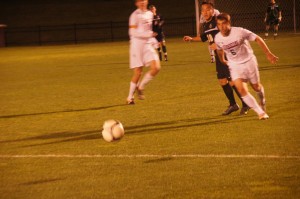 The Bucknellian Archives
Josh Butzke ’13 eyes the ball. The Bison successfully defended their home turf against Colgate in front of a large Homecoming crowd.

The men’s soccer team earned a crucial 1-0 win on Oct. 27 over visiting rival Colgate, moving the team into fourth place in the Patriot League standings with one game remaining. Entering the game one place outside of playoff contention, the Orange and Blue received an early goal from Jesse Klug ’16 and held on for the remainder of the contest to improve their league record to 2-2-2.

“The win against Colgate was a big win,” Brendan Burgdorf ’13 said. “It kept our chances of making the Patriot League Tournament alive, which has been our goal all season. Colgate is one of the top teams in the conference, so beating them gives us a lot of confidence that we can compete for the championship.”

Klug’s goal in the first five minutes of play provided an early spark for a Bison squad that has consistently been faced with early deficits throughout the season. Sprung on a breakaway by a Burgdorf header, Klug netted his third goal of the season into the right side of the net, launching an eruption of cheers from a large Senior Day crowd at Emmitt Field.

From that point on, the Orange and Blue defense held strong and allowed the Raiders just six shots throughout the contest. Goalie Mike Lansing ’16 made a key diving save midway through the first half to conserve the Bison lead and the Raiders could not create another legitimate scoring chance from that point on.

“The win was big for a few reasons,” head coach Brendan Nash said. “We had a nice Homecoming crowd, they are the defending champions and we needed to win to stay alive in the Patriot League playoff hunt. The win will help our confidence moving forward.”

Following the win, the Orange and Blue earned a 2-2 tie at Binghamton on Oct. 30. The team faced an early 2-0 deficit, but rallied in the last 20 minutes of the game to avoid the loss. Cinotti and Mark Kramarchuk ’16 scored the two goals for the Bison, giving the team a much needed boost of confidence heading into this weekend’s decisive match-up against Lafayette.

“There are many different options for the playoffs. However, the easiest thing for us to do is to get a win this weekend and get into the tournament,” Nash said. “Our guys know that once a team qualifies for the playoffs, the title is up for grabs. Yet, we first need to focus on qualifying this weekend.”

Standing in a tie for fourth place with Holy Cross, the Bison are guaranteed a playoff spot with a win tomorrow against Lafayette. The much anticipated game is slated to begin at 4 p.m. in Easton, Pa.