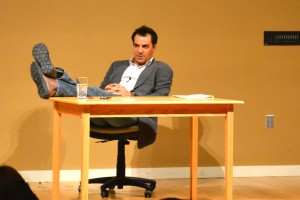 Ally Boni | The Bucknellian
Alex Lyras brought Steve Jobs’ legacy to life in “un/real and un/true: The Agony and the Ecstacy of Steve Jobs.

The Bucknell Forum “tech/no” National Speaker Series hosted an original University production to unveil the fact and fiction surrounding the life of Steve Jobs and the ever-encompassing hold Apple has had, and continues to have, over the world. Starring Alex Lyras ’93, a successful solo theatre writer and actor, and directed by Bob Gainer, the play within a play also included faculty members and students as part of the cast, or writing or research teams. “un/real and un/true: The Agony and the Ecstasy of Steve Jobs” took place on Nov. 27 at 7:30 in Trout Auditorium. 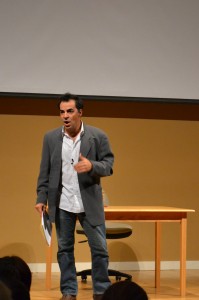 Ally Boni | The Bucknellian
Lyras gives a realness to Jobs in the Agony and Ecstacy of Steve Jobs.

“Before joining this project, I had no idea how much time and effort went along with putting on a production of this size,” Rachel Litt ’13 said. “Maybe my jaded Bucknell mind that craves instant gratification merely thought speakers appeared out of thin air and arrived on campus for our entertainment. But it’s so much more than that. Scheduling, script editing, rehearsals … and that’s just the tip of the iceberg.”

This play was based on the original production of The Public Theater, “The Agony and Ecstasy of Steve Jobs,” starring Mike Daisey, the writer of the play. The production utilized and reduced Daisey’s original script, with his permission.

“Being a member of the script writing committee … we chose the interruptions, completed the research, wrote the insertions and lastly placed them in the script,” Litt said. “It was challenging, but so much fun.”

In fact, the original script and the controversy around it more generally aims at the question of whether technology is ultimately good or bad, a question that captures the essence and goals of the “tech/no” series. The University’s play within a play unfolded a series of debates that the task force shared in trying to find the truth.

“I got involved in the play because I am in Business, Government and Society with Professor Jordi Comas, and he was one of the producers of the play,” Kathleen Lenox ’13 said. “For homework, we listened to the original podcast of Mike Daisey performing ‘The Agony and the Ecstasy of Steve Jobs’ on National Public Radio’s ‘This American Life.’ I was listening to Mike Daisey reveal the horrible working conditions at the Foxconn factory … and became frustrated with myself. A week later, we listened to Mike Daisey’s retraction in which he admitted that he fabricated many details. I then became frustrated with Mike Daisey. He lied to a lot of people. This frustration led to a curiosity of the actual truth, which had to lie somewhere between Apple’s glossy investor reports and Mike Daisey’s ‘reporting.’ Thus, when I heard about the opportunity to join the forum and share the truth with an audience, I took it.”

Daisey focused “The Agony and Ecstasy of Steve Jobs” on the immorality associated with factory conditions in Shenzhen, China. The rest of the issues surrounding Jobs and Apple branch from the idea that people should be responsible for knowing where their technology and other items come from. “un/real and un/true: The Agony and the Ectasy of Steve Jobs” presented fact and fiction through Daisey’s supposed view of Jobs, alongside Daisey’s fabrications and exaggerations.

Throughout the play, faculty stood and spoke about what they believed was the truth. For example, Zhiqun Zhu, MacArthur Chair of East Asian Politics and associate professor of political science and international relations gave his opinion that Daisey generalized superficial phenomena.

The audience was presented with statistics that served as facts: Foxconn, stationed in Shenzhen, is responsible for 50 percent of all of the electronics of the world. A live interaction with Siri on the iPhone was also presented by Lenox as a fact; Siri will not answer a question regarding the iPhone’s origin.

Further, Daisey’s voice continued to describe the factory conditions, especially by stating the suicides that have occurred, and the precautions that Apple has supposedly taken to stop the madness: putting up nets around the area. The play shifted to an interview with Jobs, who stated that 13 out of the 400,00 people employed in the factory had committed suicide over the course of a particular year, and that was under the U.S. suicide rate. As a company obsessed with detail, according to Daisey’s words, how could they not know what was ensuing in these factories? Apple merely sees what it wants to see.

Problems regarding fact and fiction arise, in particular, to the n-hexane issue. As a narcotic agent, clearly dangerous to humans, n-hexane, supposedly used in the factories, harmed workers, according to Daisey. However, through later research and interviews, it became clear that Daisey had never met a worker who had been affected by n-hectane. Moreover, when interviewing Cathy Lee, Daisey’s translator at the time, it also became known that Daisey had exaggerated other details (for example, that the guards at the gates held guns). Where should the line be drawn between exclaiming fabricated and truthful accounts with the aim of proving a point?

“Rachel Litt, Nick Stetz ’13 and I poured over his original script looking for ways that we could show how nuanced reality actually is,” Lenox said. “We did not set out to prove that Mike Daisey was a liar, but that his truth was not factual enough to give his audience a good understanding of what is actually happening in China.”

The audience was left with questions to prompt thought and further discussion.

“Our ultimate goal was to show the audience that they should question whatever piece of information they are shown; they should not take it as fact,” Lenox said. “We wanted to show the nuances of the truth that exist depending on the source and to encourage the Bucknell community to think critically about what is really happening.”