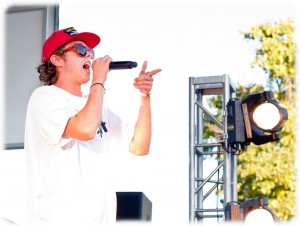 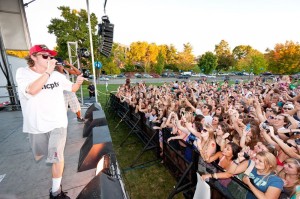 Rap artist Sam Adams says he doesn’t get stage fright—which is fortunate, considering the crowd of students that flocked to Sojka Lawn see his performance at Fall Fest on Saturday, Sept. 25. “It’s the best part of the day, to actually do your show,” Adams said.

The final performer of the day, Adams took the stage at 6:00 p.m., after a brief performance by G. Curtis. Adams encouraged the crowd to move even closer to the stage and to “make some noise.” Not one to disappoint an eager audience, Adams delivered a performance that begged two encores from the crowd. They chanted “Sammy,” urging him back onstage.

Fall Fest is organized each year through Activities and Campus Events (ACE) and the University’s Campus Activities and Programs (CAP) Center.“The CAP office is the car, but ACE is the wheels,” said Dorsey Spencer, assistant director of CAP.

ACE was responsible for choosing this year’s musical act and setting up the day of the event.

This year’s theme was “Bucknell Goes Green.” There were lines of garbage and recycling cans on the lawn. One group was for biodegradable trash, the other for compostable food.

ACE members also manned a number of stations at the event. Some sat at a table handing out free water bottles. Others watched over the tie-dye T-shirt and customized Frisbee stations. There were inflatable jousting pits, obstacle courses and a dunk tank.

Some student organizations, including the environmental club and the Bucknell Professional Network (BPN) also had stands. Justin Brodie-Kommit ’12, head of the BPN, sees Fall Fest as the perfect opportunity for a number of campus organizations to connect with students.

“We’re just trying to let the community know that we’re here on campus,” he said.

Fall Fest encouraged networking and socializing with its open and friendly atmosphere. Students played catch and Frisbee on Sojka lawn. Some people brought children and pets. As student musicians performed, people sat on the grass to listen.

After a barbecue-style dinner prepared by the Bostwick staff, DJ Doug Bogan ’13 took the stage. He invited Darren Harris ’13 to rap for the audience. A number of students crowded around the front of the stage, growing more enthusiastic as Adams’ performance drew closer.

The first non-student act, Na Palm, offered a personalized, energetic performance, further riling the crowd. At one point, they described Fall Fest as “a mini … Woodstock.” This seemed a fair comparison in terms of the atmosphere of the event—though the musical offerings at Fall Fest may have differed a bit from performers like Jimi Hendrix. The enthusiasm of the crowd powered the event and crescendoed during Adams’s high-spirited and engaging closing performance.