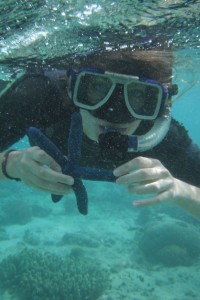 On my first day in Australia, I decided Australians must not really speak English.  As our international orientation leader spoke to our group on the bus moments after we got off the plane in Melbourne, I glanced at the other Americans near me and noticed their generally confused faces.  Most of us understood about half the words she said.  At the end of my four-and-a-half-month semester, I asked a friend sitting next to me on the plane ride home whether the flight attendant had just spoken in an American or an Australian accent.  She thought for a second and said, “Australian?”  She was right, but it made us both realize how much we had changed since our first day in the country.

Last semester, I spent my time studying and immersing myself in the culture of Townsville, Australia at James Cook University.  Although it’s about the size of the continental United States, Australia’s population is little more than three times that of New York City.  The tropical city of Townsville is on Australia’s northeast coast, adjacent to the Great Barrier Reef and near the rainforest.  Here, I made my home on the first floor at University Hall on JCU’s campus, among mostly Australians and a mix of international students, and always within earshot of Aussie accents, techno music and the birds in the palm trees beyond my balcony.

On my trip, I dove near the Great Barrier Reef, held a koala, sampled new foods and spotted wild kangaroos.  These were great adventures, but it was the simplest things that surprised me most.  I never ceased being fascinated by the wildlife. The first day in my dorm, I walked into the bathroom and was shocked when I saw a gecko running across the ceiling. In town later that month, I passed a tree full of squawking rainbow lorikeets. While camping, we saw pesky bush turkeys and giant lizards called goannas.  During class field trips, I went snorkeling on an island to identify reef fish, and “in the bush” I helped survey frogs, lizards, snakes and other vertebrates.

Simple cultural differences were always interesting to observe.  While eating in my dorm’s cafeteria, I spent countless dinners explaining the appeal of peanut butter and jelly sandwiches, Reese’s candy, apples with peanut butter or caramel and how to make s’mores.  The Australians I lived with in turn explained the apparently acquired taste of Vegemite on toast, as well as the many ways to make Milo and expressed their shock that anyone lived in a place without Tim Tams (delicious chocolate covered cookies).  We talked about differences in the school systems, the different styles of dancing, the time malls close and the “no worries” attitude of Australians.  Before this experience, I never really realized the range of cultural differences between Americans and Australians.

Initially, I defended my American background and believed all the things I had grown up doing were “normal.”  I thought driving on the right side of the road was natural and a squirrel-infested campus was the way it was, even if it wasn’t especially desirable.  Soon, I started to embrace the Australian culture, trying to use the word “uni” instead of “college,” becoming accustomed to turning the lock the opposite way to unlock doors and attempting to remember that the right side of the car is the driver’s side.  When I came back to campus, I told all my friends the wonderful things I learned in Australia.  I tried to teach them how to use the words “keen” and “arvo” (afternoon) in a sentence (Are you keen to go to the beach this arvo?), and I explained the differences in their music and television shows. I explained that, despite the venomous snakes, deadly stingers (jellyfish), vicious crocodiles and other frightening animals living in Australia, I made it home safely and would definitely go back.

Australia taught me so many things about following my dreams, trying new things and making the most of every experience.  I know the things I learned studying abroad could not have been told to me, but only learned through experience.  I will always remember the time I spent in the “land down under” and I’m heaps keen for another adventure.