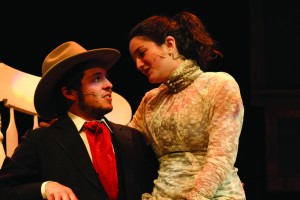 Sam Shepard, an American playwright, has composed more than 50 plays, so when the theatre department decided to make him the focus of the fall season, it took an interesting approach. Whereas the usual method of collegiate play performance is to perform the same, full-length work for several nights, Shepard’s work led them to instead perform 11 of his plays over two weekends.

These plays, some of which are adapted short stories, range from five to 40 minutes, and according to director Gary Grant, many of them are rarely performed. Most of the plays have two to three main cast members, with the exception of “tongues,” which contains the full cast of 17. When actors are not in the spotlight, they fill other roles as part of the ensemble.

The main roles rotate between actors, so each artist has the chance to perform an “Aria Monologue,” which according to Grant is “when characters just start talking and talk for a while.” It is a common feature of many of Shepard’s plays, and he said it was important that as many people as possible have the experience.

This distribution of roles seems to have led the students involved with “Shepardfest” to establish close bonds with their fellow cast members.

According to Sheridan Gates ’14, who works behind the scenes, “everyone is so collaborative. Doing this is a huge time commitment, but it made everyone really close. I’m really impressed with the whole process.”

In addition to their unique scheduling of performances, set–makers have been creative with the way the audience views “Shepardfest.” While there is traditional seating in the back of the theatre, there is additional seating just under the stage in chairs around tables, to create the feel of a café and involve the audience further. Two large screens sit on the stage for video projections of old comedies and television shows, created by Diego Chiri.

The plays are diverse in content, style and musical content. One is actually a collaboration with Patty Smith, who writes rock-and-roll poetry.

“Shepard’s plays are set in the most ordinary of circumstances, but outrageous things happen. The characters are so interesting, there’s an unrelenting progression to the plot and the language is so descriptive and so visual that you are compelled to suspend your disbelief,” Grant said. “Things are as they seem to be, and they are not as they seem to be, and sometimes this incongruity frightens terribly or makes us uneasy. But usually in a Shepard play, these juxtapositions are very funny.”

“Shepardfest” has its final performances this Friday, Saturday, Sunday and Monday, at 8 p.m. in Tustin Theatre.