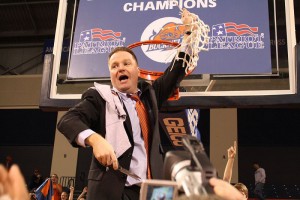 The story of Dave Paulsen’s road to the Bison men’s basketball program is one that few outside of the team’s inner circles have heard.

After former head coach Pat Flannery, whose monumental upset over Kansas in the NCAA Tournament in 2005 and victory over Arkansas the next season put the Bison on the map nationally, retired abruptly in the summer of 2008, Paulsen took over a team needing some direction. Coming to an established Division I program from the Division III level, the stakes and the pressure facing Paulsen were enormously high.

Despite the pressure, his commitment to the program was obvious right from his first moments as head coach of the Bison.

“Paulsen eased the transition of the coaching change by simply saying that he chose us,” Darryl Shazier ’11 said. “This was really important to myself and the others who were recruited by Coach Flannery. We had no choice as to if he was our coach, but he made the decision to choose us.”

Struggling mightily to just seven wins in his first season at the helm of the Orange and Blue, Paulsen rebounded last year in 2010, leading the Bison to a second-place finish in the Patriot League standings. The season, though, would end with a stinging first-round loss at home in the conference tournament to Holy Cross, a tough way to end an promising season for Paulsen’s up-and-coming team.

Picked to finish second in conference this season, expectations were high for the Bison heading into 2011. But Paulsen was there to keep his team grounded and concentrated like he had been throughout his first two seasons.

“We really always tried to focus on getting better every single day, whether in practice or in games,” Paulsen said. “We just wanted to be the best team in the nation in terms of our practice effort, our focus-level and our consistency.”

Through eight games in the 2011 season, that effort, especially in tough losses late to Villanova, Marquette and St. Francis on the road, was not translating in victories, as the Bison stumbled out to a 2-6 record. Yet, Paulsen did not change his philosophy, sticking to what he knew best.

“We really challenged our players to find a way to dig down deep to make the extra-effort plays, the toughness plays, the 50-50 plays that distinguish the good teams from the mediocre teams,” Paulsen said.

His players noticed his commitment to working hard and to keeping their efforts at a high level, and responded positively in turn.

“Coach Paulsen did a great job throughout the season of challenging us and re-evaluating goals throughout the course of the year so we continue to improve and try to get better,” Bryson Johnson ’13 said. “Practices were always intense and that has taught us that no matter the circumstances, we must continue to work hard.”

Despite their slow start, the effort started to pay off. The victories started coming with Paulsen helping each player develop and find their role.

“Coach Paulsen has helped me develop my game in every aspect, especially on the defense end,” Bryan Cohen ’12 said. “People don’t realize how great of a defense Coach Paulsen is. He has high expectations for each player and, in my case, he expects me to never let my man score one field goal in an entire game. Overall, it may seem a little far-fetched, but having that expectation put on you makes you determined as a player to reach your fullest potential, both individually and collectively as a team.”

Paulsen’s focus on consistent play helped spark a run of 23 victories in the final 25 regular season games for the Orange and Blue. During that stretch, Paulsen always had the upper hand, outcoaching his opponent, including two separate occasions versus Richmond and Holy Cross, drawing up plays in the final seconds that would lead to game-winning baskets.

In Patriot League play, Paulsen lead his Bison to a 13-1 record and the regular season title, defeating American, the only team picked ahead of the Orange and Blue in the preseason polls, along the way. The second victory over American was Paulsen’s 300th career win in his NCAA career, which included his record coaching at Division III Williams College.

Amidst the streak, Paulsen’s demeanor on and off the court was just the same as it had been throughout his first three years in Lewisburg.

“Coach Paulsen is a players’ coach,” Cohen said. “My teammates and I love playing for him and love being around him. Not many basketball players can say that they like their coach both on and off the court. Sure, everyone gets yelled at for making a mistake but everyone one the team understands that he is only trying to bring the best out of you and to make our team achieve excellence.”

“When I’m not playing well, we’ll watch film together and talk about what I need to improve on,” Mike Muscala ’13 said. “And when I am playing well, we’ll do the same thing–which is what makes him such a great coach, always finding ways to improve and being relentless about consistency. It’s had such a profound effect on me and I’m lucky to have him as a coach.”

With such an impressive finish to the regular season, Paulsen also was named the Patriot League’s Coach of the Year and was a finalist for the 2011 Hugh Durham Award, given to the best coach of any mid-major school in nation.

In the Patriot League Tournament, Paulsen once again stepped up to the challenge, leading his Bison through three tough tests against Army, Lehigh and Lafayette to win the conference championship and earn a spot in the NCAA Tournament.

“It was a tremendous thrill,” Paulsen said. “The whole experience was kind of surreal. I was so happy for our seniors.  I told them the day I was hired that I knew they didn’t choose me, but I had chosen them. I was so glad to see them rewarded for their faith and hard work through the dark days of that first season. And I was happy to be able to reward everyone for giving me this opportunity and for the faith and support they showed me and my coaching staff.”

Even though the NCAA Tournament contest against Connecticut did not pan out in the ways that the team had hoped after their run through the Patriot League in 2011, Paulsen sees the journey there and the UConn game as a teachable moment.

“The NCAA experience was great all the way until they tipped the ball up against UConn. Then, we ran into a juggernaut clicking on all cylinders. The actual game was not much fun but, to some degree, I think you have to go through that type of experience so that, if we’re fortunate enough to advance to the NCAA Tournament again next year, we won’t be awed or intimidated by the experience. I think everyone in our program is proud of the year we had but the NCAA game left a bitter taste in all of our mouths and we want to get back and perform better in the future,” Paulsen said.

That toughness and desire to coach and get better pushed Paulsen through all of the growing pains of his first two seasons in Lewisburg and brought him and the Bison contingent home another conference championship. When next year comes, Bison fans can be sure that he will still be roaming the sidelines, getting after his players for effort, focus and consistency.

But, for right now, he will be satisfied with all he accomplished in 2011.

“This is a tremendous honor, given what an outstanding group of coaches we have here within the athletic department at Bucknell,” Paulsen said. “It really is special to work within a department that values excellence and I have benefitted greatly from the input and support of many of my colleagues here at Bucknell. Most importantly, I have been so fortunate to have the best group of assistant coaches that I could ask for. Every member of my staff has had a tremendous impact in teaching our players, coaching in practice in games, preparing scouting reports and helping to recruit our student-athletes.  They share equally in this honor.”