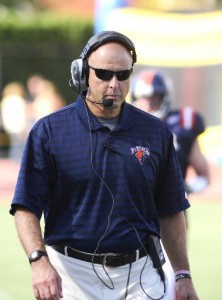 Great leaders often define themselves in times of controversy or crisis. For head football coach Joseph Susan, the defining moment of his early career as coach of the Orange and Blue could have come this season.

After the team finished 1-10 in his first season, Susan knew he had a tough task ahead of him in revitalizing the football program. Just one year later, the Bison, propelled by a newfound tenacity and team unity under Susan, improved to 6-5 overall (2-3 in league play) and set the tone going into the 2012 season as a contender in the Patriot League.

“Each team is buying into the system that Coach Susan is trying implement with the Bucknell Football program,” said tight end Terna Ityokumbul ’13.  “I think it’s also another year running the same plays and not just running the plays to run them, but knowing what each person’s role in the play is and seeing the overall picture.”

To improve by five wins in one season with just an 11-game schedule is no small feat for any team, and takes a strong and supportive leader to get players to buy into a system after producing just one win in the prior season.

“I believe the biggest difference in our team this year was the way our players bought into how we approach the game. It is not an overnight process,” Susan said. “The impact of how we strength train, how we condition, how we study the game is one that takes time to build.”

Susan said trust among the players and coaches is essential to building a successful football program.

“There was a lot more trust in one another [this year]. [Players] also developed a lot more self-confidence. That is crucial to being able to play together,” Susan said. “Trust is a word that has depth of meaning when it comes to tying 95 players, nine coaches, five trainers, six managers and other support personnel into one vision.”

Quite possibly the greatest change in the team was seen on defense, where the Bison held the FCS’s highest turnover differential in the regular season at +27. The Bison also recorded their first shutout since 2001 with their 21-0 win over Fordham.

“One of the biggest changes was how we did with the ball,” Susan said. “We led the nation in turnover margin. It is something we teach, and something we practice every day. Our players have to trust the system for it to work.”

Bryce Robertson ’12, who led the nation in interceptions with 13, said Susan worked with the players to build trust and change the overall mindset of the team through his SAM concept. SAM stands for “Selfless, Accountable and Mentally tough,” and everything that Susan has implemented into the program revolves around these three ideas.

For Robertson personally, Susan’s teachings were a major factor for him having one of the top seasons for a defender in the entire history of the Orange and Blue football program.

“A good amount of the success I had this season can be attributed to Coach Susan’s teaching this past year because much of it was a direct result of buying in to his way of doing things,” Robertson said. “I was always selfless in the way I approached each game, and did what I could do to be the best at my position in order to be accountable to my team every time I was called to perform.”

For Robertson and his teammates, Susan’s effectiveness can be attributed to his unwavering toughness in all situations.

“In choosing one memory I would say that the time when he suffered a wipeout one game on our sideline would be the winner,” Robertson said. “The play was heading towards our sideline directly at Coach Susan. Right before the ball carrier reached the sideline he was undercut by a defensive player who then undercut Coach Susan. After the play he calmly rose to his feet, looked around and smiled. From that day on I had a new outlook on the difference between pain and injury.”

It is clear that Susan has the Bison heading in a positive direction as they look towards building upon the improvements made throughout the 2011 season. With a strong defense and a rising offense led by running back Tyler Smith ’13, Susan expects the Orange and Blue to achieve new levels of success in 2012.

“There is one goal for our program: for every player to work to be the very best they can be. The human element comes into play and we cannot allow distractions to change our course,” Susan said. “There are no awards for second place. We are working to win championships. We will win the right way. Our players will be leaders on and off the field. They will be leaders beyond their time at this special place.”

Without a doubt, the Orange and Blue football team has a tremendous leader in place to guide it for many years to come.