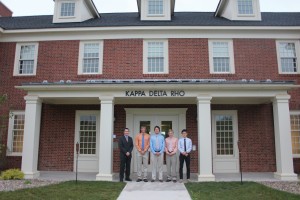 Ben Kaufman | The Bucknellian
Members of the newly colonized Kappa Delta Rho fraternity stand in font of their house, built this summer.

The Kappa Delta Rho fraternity (KDR) took part in the recruitment process this fall after its recolonization. With a current total membership of 15, members of KDR are looking forward to the future.

“First off, the Formal Recruitment process was a very big success this year, and we placed over 225 men into the fraternities on campus,” Interfraternity Council Recruitment Chair Bill Prendeville ’13 said. “During the process, KDR had several out-of-town members as well as the few founding members come to the house and hold their recruitment events.”

Recruitment for KDR included the same format and events as those for every other fraternity recruitment on campus.

“ … The major difference is that we began meeting with freshmen last semester and held a formal dinner at the new fraternity house that included 70 undergraduates,” Sviatoslav Lesko ’13 said. “During the summer, the original four members who were offered bids last semester–Dotun Odewale ’13, Mo Karam ’13, Nathan Coughenour ’14 and myself–attended KDR’s national conference in Pittsburgh, Pa. to learn about KDR’s traditions, values and organizational structure.”

According to Lesko, this group developed strong relationships with brothers from other institutions, such as Rutgers University, Lycoming College and Bloomsburg University, and these brothers visited the University to assist with the recruitment process.

“With the help of these individuals, our [Educational Leadership Instructor] Brad Ostermann (who will be living at the fraternity house for the entire year), our national advisor Shane Henry, our national director Joseph Rosenberg and generous alumni who helped fund our meals and furnished the house, we were able to go through the recruitment process smoothly,” Lesko said.

By the end of the recruitment process, nine sophomores, one junior and one senior accepted bids.

“With KDR being new, people were interested in joining, but they were unsure of who else was going to join and what kind of a group it would be,” Stephen Prescott ’15 said.

Lesko feels this new group has so far proved to be compatible and close.

“ … we developed chemistry immediately, mainly because of the sense of opportunity we all felt for building an organization based on the principles of honorable leadership from the ground up,” Lesko said.

KDR will begin rolling recruitment Sept. 14, and this will be open for the remainder of the year.

Kevin Foster, the Intrafraternity Council Advisor, declined to comment on KDR and its recruitment process.