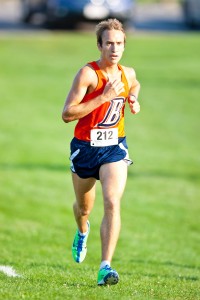 The men’s cross country team got their season off to a very strong start, as they finished one-two-three at the Bison Open and fifth overall at the Harry Lang invitational.

On Aug. 31, Glen Williams ’15 ran to his first career win in the Bison Open, finishing the three-mile course in 15:09, 15 seconds ahead of the nearest competitor. That nearest competitor was his teammate, Robert Yamnicky ’13, who finished in 15:24. Brian Charland ’13 was not far behind, finishing in 15:28 and completing the sweep of the top three positions for the Orange and Blue.

“Although it was very hot out, most of the team put up great times. We held 13 of our runners out of the race and we still easily dominated the competition, which really shows the depth we have this year,” Williams said.

Just a day later, much of the team travelled to Colgate for the Harry Lang Invitational, where the men’s team earned a respectable fifth place finish. John Dugan ’15 was the top finisher for the Bison, finishing the 6,400-meters in 20:41 and in 15th place. He was followed by D.J. Krystek ’13, who finished in 18th place with a time of 20:46.

“We had a pretty intense week of training leading up to the races, and to come out with a solid performance is exciting … Colgate is a challenging course and I think we gained an advantage by experiencing the course in a race setting and seeing some of the teams we will race at leagues,” Krystek .

“Being the first meet of the year and coming off a very hard training week, I wasn’t as concerned about the final results as I will be later in the year. I was more concerned about  getting to know the Patriot League Championship course and giving a solid effort, even with tired legs … If we can get our number three-four-five runners to close the gap on Dugan and Krystek, then we will be a very good team,” head coach Kevin Donner said.

The Bison will run again this Saturday in the Running Fit-Detroit Titan Invitational in Northville, Mich.