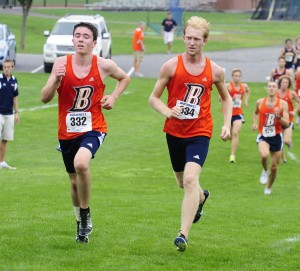 Courtesy of Athletic Communications
John Dugan ’15 and Dustin Horning ’13 lead the pack. The Orange and Blue led often at the Running Fit-Detriot Invitational last weekend, where they won the team meet.

Caroline Tolli ’13 showed her determination once again as she led the women to a team victory and won the five-kilometer race with a time of 18:27. Katie Jessee ’15 came in second overall and finished behind Tolli for the second time this season with a time of 18:50. Montana DiPietrantonio ’15 finished fourth with a time of 18:59 and Alison Billas ’16, Betsy Edinger ’15, Beth Braunegg ’14 and Meghan Carroll ’16 finished fifth through eighth, respectively.

Overall, 10 of the top 15 finishers were running for the Orange and Blue, putting them in first place out of 10 teams, with a total of 18 points and seven of the top eight spots.

“Our women took control of the meet very early and I am happy with the consistency of most of them. Eighteen points was the lowest score in the meet’s history, however, we will see better competition later on,” head coach Kevin Donner said.

The Bison defeated Wayne State (49 points) and Detroit (90 points) to earn the victory.

“The Detroit Invitational was an awesome experience because it allowed us to see our coach’s old home course and compete against teams from a different region. Our team worked really well together during the race by focusing on running in packs and staying mentally tough. We’re excited about how our season is shaping up and will be taking these next two weeks to train hard for our next meet at Saint Francis,” Braunegg said.

The team completed the invitational with 26 points to beat Wayne State, who finished in second place with 47 and Detroit in third place with 62.

“Our men ran a little better than last week. It was good to get McGowan back from injury and Garcia-Garrison needs to be scoring for us as well. Winning the meet on a tough course was an honor and now we can train for 20 days without a meet to help us improve and get ready for the championships in seven weeks,” Donner said.

The Bison will have a three-week break from competition as they prepare for the Saint Francis Invitational on Sept 29.