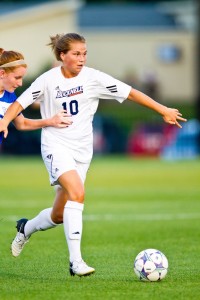 The Bucknellian Archives
Evelyn Nicinski ’15 looks for an opening in the opposition’s defense. Her goal helped lift the Bison over UMBC for their fourth win in a row.

The women’s soccer team had a solid week, picking up wins against Mount St. Mary’s and UMBC. Goal keeper Sandita McDermott ’13 held down the box and got her fourth shutout of the season. Unfortunately, the Orange and Blue’s win streak ended at four with a loss at Saint Francis (Pa.).

Behind a scoring blitz from Evelyn Nicinski ’15 and Courtney Nelson ’15, the Bison defeated UMBC 3-0 at home on Sept. 7. Three minutes into the game, Hannah Bonotto ’15 nailed a free kick into the box that found Chelsey Garkowski ’14, who headed the ball to Nicinski, which allowed her to score her first goal of the season. Garkowski  also battled for a 50-50 ball that rebounded to Nelson for another Bison goal.

Nelson, who made the transition from defender to forward this year, leads the team with four goals this season.

“It has actually been a pretty big mental transition; my mind has always been focused on stopping people from scoring,” Nelson said. “However, I’ve always been one of those people during practice that likes to shoot and get in on the offense.”

Corey Tipton ’14 capped off the victory with a goal off an assist from Brigit Falcon ’15 and Corinne Collins ’13 in the 69th minute. McDermott broke the Bison record for longest scoreless streak and had six saves for the game.

“I think the quick offense really helped us to seal the deal,” McDermott said. “Having so many great individual performances really has helped this team to keep the ‘team’ mentality moving forward.”

After a three-game shutout streak, the Orange and Blue were met with a potent offense by Saint Francis that defeated the Bison 5-1 on Sept. 9 at Loretto. It was a tough game, as the Red Flash had 22 shot attempts. Saint Francis scored two goals in the 17th and 43rd minute that gave them the 2-0 lead at halftime.

The barrage continued early in the second half with Saint Francis nailing three goals in less than three minutes to put the game away. Danielle Piccirilli ’16 scored the lone goal for the Bison in the 72nd minute.

Two nights later, the Orange and Blue bounced back from the loss to capture a 2-0 victory against Mount St. Mary’s at home.

It was a balanced game for the Bison, as they attempted 17 shots and held the Mountaineers to seven shots. Kayla Yee ’13 scored a goal off of a penalty kick at the three minute mark to get the Bison off to an early lead. Taryn Boucher ’13 stayed aggressive on the offensive end with five shot attempts and scored in the 76th minute to ice the game.

The Bison will travel to Moraga, Calif. to compete in the St. Mary’s Tournament this weekend.

“Each game is a new challenge, and there are only a number of things that we can do. We try to focus on fighting for each other, staying positive and keeping calm,” Nelson said.