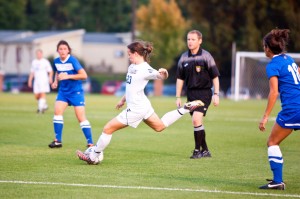 Edward Louie | The Bucknellian
Courtney Nelson ’15 strikes the ball. The Bison gained valuable experiences in their two game trip; to the west coast.

The women’s soccer team went 1-1 this past weekend to earn second place in the St. Mary’s Tournament in Moraga, Calif. It has been 13 years since the Orange and Blue have traveled to the West Coast and they started out with a 3-1 victory against CSU Bakersfield on Sept. 14. Two nights later, the Bison had trouble finding the net, as they fell 2-0 to Saint Mary’s (Calif.). Chelsey Garkowski ’14, Kayla Yee ’13 and Corinne Collins ’13 earned spots on the All-Tournament Team.

Traveling to the West Coast had no negative effects on the Orange and Blue, as Yee dished an assist to Garkowski leading to the first goal of the match in the fifth minute. CSU Bakersfield outshot the Bison 7-4 in the first half, but were unable to score on Sandita McDermott ’13 who had six saves in the game.

“It was great to play in the scenery we did on Friday,” forward Cassie Denger ’15 said. “The temperature was great and the sun was shining; it was a beautiful day to play.”

The Roadrunners continued their aggressive play, reeling off another 15 shots in the second half, but the Bison made their opportunities count. Liz Dwornik ’14 delivered a cross pass that led to a shot by Denger, which gave the Orange and Blue a 2-0 lead. Five minutes later, Jenna Tryon ’13 launched a long pass to Garkowski, leading to her second goal of the game and a team-leading four shots. The Roadrunners scored in the 80th minute to prevent the shutout.

Twenty-four players saw action in this game, and goalie Jessie Ashworth ’16 made her collegiate debut with two saves in 12 minutes of action.

“It was great to get a win on the West Coast,” Denger said. “By using all 24 players it really helped us keep the level of play high in the heat. We always had fresh legs on the field and it gave us a great advantage in the second half. Winning feels great no matter what coast you’re on.”

Although McDermott had a season-high 10 saves against Saint Mary’s, the Bison offense couldn’t get going, losing 2-0 to the host team. This is only the second time this season that the Orange and Blue were held scoreless.

The Gaels were able to jump out to an early lead with a goal in the 16th minute. Both teams battled for position to score, but it stayed 1-0 at halftime.

The Bison were determined to even the score with five more shot attempts in the second half. It would be to no avail, as the Gaels stopped their offensive flow. Saint Mary’s scored their second goal in the 88th minute to put the game away.

The Orange and Blue have their final game before Patriot League play tonight at 7 p.m. at home against Canisius.

“Going into conference play, we have the highest expectations. We have seen it all in the pre-conference season and hope to carry those experiences forward to help us have success in the Patriot League,” McDermott said.