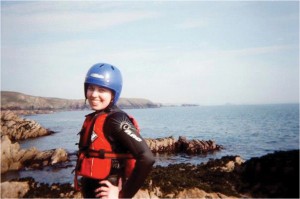 I spent the fall of 2011 studying abroad at University College London in London, the United Kingdom, as a part of Arcadia University’s College of Global Studies program. Abby (a fellow UCL student from Brandeis University) and I decided to travel to Cymru, or Wales, as it is most commonly known here.

We took a train from London to Haverfordwest (Welsh: Hwlffordd), which is in a southern Welsh county called Pembrokeshire, home to the UK’s only coastal national park. After thankfully not getting run over by Welsh people in cars driving through roundabouts, we caught a bus from Haverfordwest to St David’s (Tyddewi). It actually is the smallest official city in the UK, and is the site of the final resting place of Saint David, the patron saint of Wales. 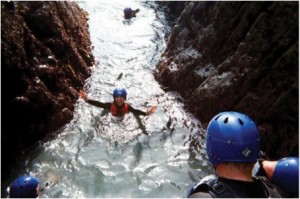 The next day, we decided to go on an early morning hike along the coastal path. The coastline was breathtaking. Since we were in a national park, it was virtually untouched, dotted only by the occasional Welsh farmhouse. There was something magical in this place, and I can’t exactly place it. I’m not sure if it was from the windy cliffs with the soft, lush green grass, the wind-eroded rocks scattered along the land or the wild Welsh ponies that were literally right in front of us.

After lunch, we went coasteering, which is a combination of rock climbing, swimming, diving and pure adrenaline. It was pioneered right here in Wales over 25 years ago.

I have a fear of heights, but I felt safe going with our trained coasteering guide, Jon, who knew the safe places to dive into the water, as well as where we would not be disturbing the wildlife. After climbing down the rocks near the water, our first task was to jump down nearly three meters into the cool Atlantic. I gingerly gathered my courage and jumped. The feeling of the water rushing around me was refreshing and exhilarating. Jon told us the first jump was always the hardest. We then jumped and swam into a little inlet Jon called “the Toilet,” where the little channel caused the water to rise and fall by about five meters, making me feel as though we were in a whirlpool. Being (safely!) at the mercy of the waves was quite an unusual experience, but it was probably the most fun I’ve ever had in my life.

What I found the most fascinating about coasteering was how up close and personal I could to get with a marine ecosystem. We used the kelp that was attached to the rock walls to pull ourselves up onto the dry rocks, and it was amazing to see how strongly the kelp was attached. We used the barnacles on the dry rocks as grips to prevent ourselves from falling into the surf. We also swam inside of a cave, where the waves carved out a cathedral of rock from the inside.

Before we took the train back to London, we explored St Davids a little more, and went to the church service at the local cathedral. It was nice to visit the church and experience it for the purpose it was built for: worship. Interestingly, Her Majesty Queen Elizabeth II is actually a member of the congregation there.

After having proper English (or I guess Welsh) tea and Welsh Cakes (which were sweet pancake-shaped biscuits), we caught the bus back to the train station for a long ride back to London.