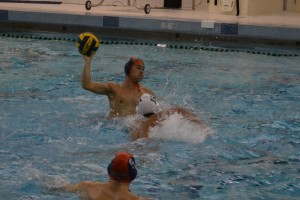 Estie Pyper | The Bucknellian
Attacker Julian Colina ’14 takes a shot on net. The Bison players made their shots count when it mattered most, especially in the last-second win against Princeton.

The men’s water polo team went 3-1 last weekend in a string of games when it hosted CWPA rivals Johns Hopkins, Navy, George Washington and No. 16 Princeton. The Bison are now 5-1 at home on the season.

On Oct. 13, the Orange and Blue began their home stint by defeating Johns Hopkins in overtime 12-10. The match was back and forth throughout, most notably marked by Matt Napleton ’13, who recorded 16 saves. In the field, the Orange and Blue had five different Bison tallying a pair of goals, with a total of seven Bison registering a point. Notable performances came from Jack Else ’14, who drew five ejections, and Brian Barron ’13, who won all six swim-offs, including two extremely important ones in overtime.

The second game against No. 14 Navy was Senior Night for the Orange and Blue. Led by senior captains Napleton and Barron, the Bison fought hard but fell to the Midshipmen 17-11. The contest was close for the majority of play, with the Orange and Blue only trailing by one entering the fourth quarter. In the fourth, the Midshipmen outscored the Bison 6-1 in the final eight minutes of play. Despite the losing effort, the seniors saved some of their best performances of the weekend for this game. Barron found the back of the net eight times, recorded an assist and won two of his four sprints. Barron’s eight goal tally was the most by a Bison since 2000. In goal, Napleton stopped 11 shots in 32 minutes of action, and  additionally registered an assist in the game.

To kick off action on Oct. 14, the Orange and Blue defeated George Washington 13-8. The Bison outscored the Colonials 4-1 in the second quarter, giving them a three goal lead into the half. Alex Nowlin ’14 led the offense for the Bison, netting five goals and tallying two assists. Joining him with multi-point performances were three other Bison: Barron, Else and Stefan Aleksic ’16. Else also matched his career-high for ejections drawn in a game with six. In goal, Napleton made an impressive 15 saves.

In the final game of the weekend, the Orange and Blue defeated No. 16 Princeton 10-9. The Bison led in the first quarter 3-0 and took a 5-2 tie into the intermission. In the third quarter, the Bison held the three goal lead by matching Princeton’s three scores with three of their own. With 49 seconds left to play in the fourth quarter, Princeton tied the score at 9-9 with a buzzer-beating shot. The Bison responded when Else drew a five-meter penalty shot with 36 seconds left to play. Barron found the back of the net, giving the Orange and Blue an eventual win. Barron scoured four goals and registered an assist. Else and Kimble were also invaluable to the Bison, with four and three ejections drawn, respectively. In the cage, Napleton recorded 13 saves.

Next up for the Bison will be the Santa Clara Rodeo in Santa Clara, Calif. on Oct. 19-21.