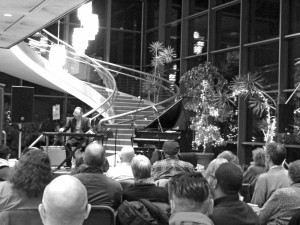 Courtesy of Lisa Leighton
Rob Schimmer, composer, pianist, and thereminist, creatively performs a unique type of music in the Weis Center for the Performing Arts lobby.

The composer, pianist and thereminist, Rob Schwimmer, had a visible presence on campus earlier this week. Schwimmer, who has worked with Simon and Garfunkel, Stevie Wonder, Queen Latifah, Willie Nelson and Queen Latifa, brought Halloween spirit to campus by performing his music that Kathryn Maguet, executive director of the Weis Center for Performing Arts, described as “something you would hear in old-school horror movies.” 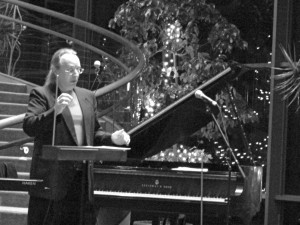 Rob Schimmer performs for audience in the Weis Center for the Performing Arts lobby.

Schwimmer kicked off his visit on Oct. 30 with a concert in the Weis Center for the Performing Arts lobby. Schwimmer showcased a wide range of his music, spanning from pleasant to unsettling, but never boring. At the concert, which was open to the public, the performer created an intimate and vibrant atmosphere while playing the piano, theremin, Haken Continuum and waterphone. The audience was completely full, and extra seats were provided to accommodate the crowd.

Schwimmer additionally lectured on Oct. 31 at the Samek Art Gallery when he spoke to professors and students of the physics department about the science behind the many instruments he plays. Schwimmer described exactly how the theremin, an instrument played without direct touch, works by manipulating an electromagnetic field that circles around a metal antenna with the hands.

“[The event] is the first of many things we want to do that combine the visual and performing arts,” Richard Rinehart, director of the Samek Art Gallery, said.

Throughout the first half of this week, Schwimmer visited several classes to explain the science behind various instruments, gave private lessons to music students such as Doug Bogan ’13 and Molly Miller ’14 and visited Lewisburg High School physics classes. Schwimmer’s eerie music set the tone for a festive Halloween.