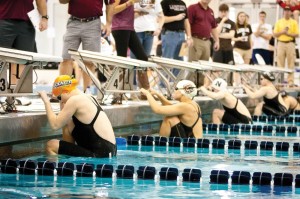 Edward Louie | The Bucknellian
A Bison swimmer prepares herself at the block. The Bison defeated American but fell to Navy.

The women’s swimming and diving team held its own in a dual meet against American and Navy, defeating the host Eagles 252-36 but falling to the defending Patriot League champion Midshipmen 185-113.

Kelly Pontecorvo ’14 (1,000 freestyle) and Emma Levendoski ’16 (100 backstroke) led the Orange and Blue in the swimming competition held at Reeves Pool in Washington D.C., both earning first place finishes in their respective events. Levendoski posted a time of 57.98 seconds in her heat. Although she already held the eighth fastest time for this event in Bison program history, she improved her record by 0.26 seconds. Additionally, Levendoski was the runner-up in the 200 backstroke. Pontecorvo also added to her contribution with a third place finish in the 500 freestyle.

“Our meet this weekend went very well,” Levendoski said. “We are continuing to improve and are getting faster at every meet. It was the first meet against teams in our conference so it was a good gauge of our competition. We are looking forward to our meet this weekend against Lafayette and the Bison Invitational next weekend.”

The weekend left the Bison’s overall record this season at 1-3. Tomorrow the Orange and Blue face Lafayette at home before the Bucknell Invitational takes place on Nov. 16-18.