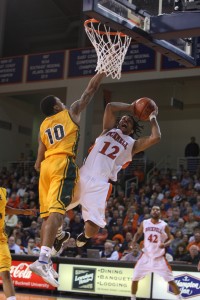 Wilson Hunt | The Bucknellian
Bryson Johnson ’13 drives to the hoop. His 16 points helped the Bison knock off George Mason on Tuesday night.

With high expectations for another run at the Patriot League Championship, the men’s basketball team got off to a good start with two gritty wins, a 70-65 stunner at Purdue on Nov. 9 and a 61-56 victory in their Nov. 13 home opener against George Mason. The two wins gave the Bison their first 2-0 start since the 2007-08 season.

“The Purdue game was a very good win for the team in front of a very hostile crowd,” Cameron Ayers ’14 said. “It was great walking off the floor knowing the hard work so far has paid off. The game was beneficial for us because we closed the game out and made the right plays at the right time.”

The Bison starting five against Purdue consisted of forwards Mike Muscala ’13 and Joe Willman ’13, along with guards Bryson Johnson ’13, Ryan Hill ’14 and Ayers. The Bison quickly went ahead 4-1 on a couple of jumpers by Hill and Muscala, but Purdue fought back and assumed the lead after three minutes of play. Purdue held the lead for the rest of the half, but could not gain more than a seven point advantage over the Bison, who went into halftime trailing 33-27.

After trading points early in the second half, the Bison went on a 10-2 tear to assume a 41-37 lead, thanks to jumpers from Willman and Ayers, a couple of free throws by Ayers after being fouled on his shots and an emphatic dunk by Muscala. From there, the game became a wild back and forth affair, with the lead changing six times over the next 10 minutes.

Ayers ended the game with a game-high 18 points, and Muscala also recorded his 25th career double-double with 14 points and 10 rebounds. The win also marked the first Bison victory against an active Big Ten opponent, and ended Purdue’s streak of 26 home-game victories against non-conference opponents.

“We came out a little slow to start the game but picked up our defense, especially in the second half, and had great offensive contributions around the board,” Muscala said. “I thought our guards did a really good job of being aggressive.”

The atmosphere was electric at the Sojka Pavilion for the home opener against George Mason, and the Bison did not fail to deliver. The Orange and the Blue jumped out to a 7-0 lead thanks to scores from Muscala and Johnson, and did not relinquish the lead for the entire game. The Bison were up by multiple possessions for most of the first half and went into the locker room with a 31-27 advantage.

The Bison managed to widen their lead to double digits for most of the second half. The George Mason defense prevented several opportunities for field goals, but also gave the Bison many free throw chances on fouls, including 10 straight points on free throws in the second half. However, a 56-44 lead with four minutes to go almost evaporated with eight straight points by George Mason, and the Bison were suddenly looking at a slim 59-56 lead with 1:17 to go. After failing to score on their possession, the Bison defense held on to prevent George Mason from any further scores, and two Muscala free throws clinched the game for the Orange and the Blue with eight seconds to go.

Muscala recorded another double-double with 16 points and 15 rebounds, while Johnson also scored 16 points for the Bison. Johnson and Ayers combined to make seven three-pointers.

The Bison look to build upon their winning streak this weekend when they head to Niagara Falls, N.Y. to face Niagara, New Mexico State and West Alabama.