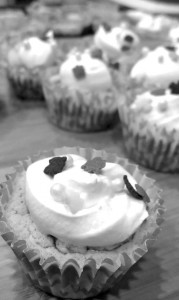 This is one of the biggest hits among my friends, and they have all agreed that if it wasn’t for me making this dessert, they would have never realized cheesecake could be so healthy. You can easily use this cheesecake recipe to make other flavors by just swapping out the pumpkin. You could even make a few kinds by splitting the recipe into halves for an extra impressive Thanksgiving display!

I decorated these with cool whip frosting (found in the freezer section) and fun sprinkles. The frosting is 60 calories for two tablespoons, but I only used half a teaspoon on each, adding only five extra calories.