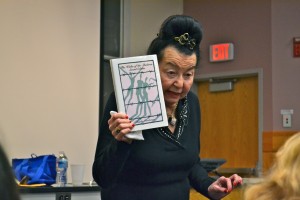 Estie Pyper | The Bucknellian
Madga Herzberger, a survivor of the Holocaust, spoke about her tribulations.

Holocaust survivor and poet Magda Herzberger spoke of her experiences on Nov. 13 in the Rooke Chemistry Lecture Hall. Her talk was part of the University’s annual remembrance of Kristallnacht, the beginning of the Holocaust, and was organized by Campus Jewish Life.

Born in 1926 in an orthodox Jewish family in Romania, Herzberger survived three concentration camps: Auschwitz-Birkenau, Bremen and Bergen-Belsen. She watched the infamous Nazi Doctor Josef Mengele send her father and uncle to their deaths, endured a 30-kilometer death march and was left dying in a pile of corpses before rescue and liberation by British soldiers.

“What kept me alive was my faith in God, passion for humanity and love for my family,” Herzberger said. “As a Holocaust survivor, one of my most important missions is to keep alive the memory of the six million Jews and others who were killed at the hands of the Nazis.”

She described working at Auschwitz’s four killing facilities equipped with gas chambers and crematory ovens, clearing bodies and inhaling the “sick stench of burning bodies … I call Auschwitz a ‘death camp’ because that was its goal, whether if you were overworked or sent to the gas chambers, you were surrounded by electric fences and watchtowers of armed guards.”

After being kept on a starvation diet, exposed to rampant diseases and surviving selection every single week, Herzberger was sent to Bremen. She was later deemed not useful, and forced to walk 30-kilometers to Bergen-Belsen camp without food or water, flanked by Nazi soldiers shooting those who could no longer walk.

“Somehow, my feet kept moving,” Herzberger said. “In those moments, God was carrying me.”

One-half of Jewish prisoners survived the march, only to arrive at Bergen-Belsen to find “a camp littered with dead bodies … Eventually, they stopped feeding us.”

After being saved in the arms of a British soldier, Herzberger recovered from her close-to-death state, returned to Romania, miraculously reconnected with her mother and eventually pursued medical school, where she would later meet her husband.

“We’re like Adam and Eve, you know?” Herzberger said, arousing laughter in the audience.

“But I had promised God that I would keep the memory alive of other victims who were left behind,” Herzberger said.

Herzberger began writing poetry in 1963 and has published several books, including her autobiography “Survival.” She concluded with reading part of the book’s epilogue: “Sufferance, agony and disappointments put something to sleep within us, but something new is born.”

“She was an excellent speaker, who connected the different parts of her life story together beautifully,” a Mount Pleasant Mills resident in the audience said. “I want to go shake her hand.”

In past years, Campus Jewish Life has featured students’ grandparents who are Holocaust survivors come to speak to commemorate Kristillnacht.

“It’s hard to find survivors who will make the journey to Bucknell, as they are elderly and traveling is difficult,” Religious Life Assistant Linda Godfrey said.

This year, Rabbi and Jewish Chaplain Serena Fujita and Godfrey were able to connect with Herzberger via the internet and telephone and organize her trip from Arizona.

In addition to this event, Herzberger gave a reading of her poetry and held a book signing at the Barnes & Noble campus bookstore on Nov. 14, where her books are currently available for sale.