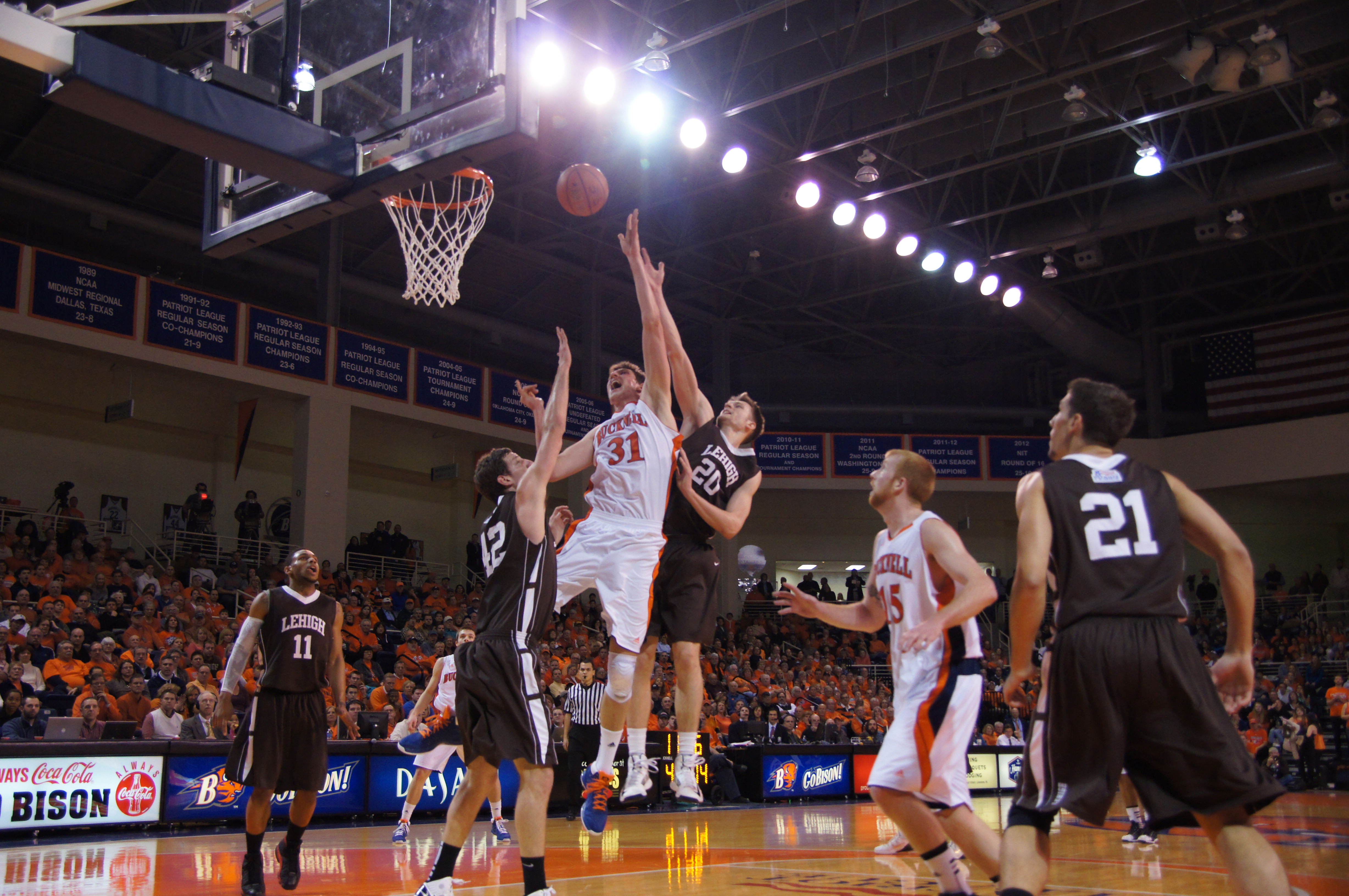 On Wednesday, the Bison fell short against Lehigh after staging a furious first-half rally that ended in a 65-62 defeat, and took down Lafayette on Saturday in a highly impressive 66-51 victory. The Bison’s record now stands at 16-4 overall, with a 3-1 record in Patriot League play.

Lehigh, last year’s Patriot League tournament champion, came into the game tied with the Bison at the top of the Patriot League standings with spotless 3-0 league records. In one of the wildest games between the two teams in this budding rivalry, the Mountain Hawks were able to hold off the Bison, despite an intense first-half rally by the home team.

The Mountain Hawks built up a 27-12 lead, before the Orange and Blue mounted a great stretch of play to close the gap to 29-28 at the half. The 16-2 run was initiated by Bryson Johnson ’13, who completed a four-point play with 5:41 remaining in the half when the offense had struggled to find any rhythm throughout the first half. Center Mike Muscala ’13 explains the challenges Lehigh poses to other teams defenses.

“Lehigh is still a very good team and we [had] our hands full,” Muscala said. “They shoot the ball well and are great defenders, so that’s a combination that is difficult to play against no matter who the competition is.”

The Bison continued their strong play in the beginning of the second half, and they eventually built up a seven-point 44-37 lead thanks to a three-pointer from guard Cameron Ayers ’14 and an impressive driving layup by point guard Ryan Hill ’14. Lehigh answered with their own 10-0 run to retake the lead at 47-44.

Muscala, who turned in another impressive performance with 16 points, eight rebounds and an astounding six blocked shots, had to leave the game with 11:16 due to an injury which forced forward Dom Hoffman ’16 into the game at a crucial junction. Hoffman turned in his best performance of his rookie season by scoring 10 points. Muscala returned to give the Bison a push, but they were unable to overcome the three-point shooting of the Mountain Hawks, who shot 10-18 from beyond the arc and came into the game second in the nation in three-point shooting with a 42.8 percent. In contrast, the Orange and Blue shot only 2-14 from beyond the arc.

Against Lafayette, the Orange and Blue were once again led by Muscala who posted his nation-leading 13th double-double with a 27-point, 15-rebound effort. Willman, who was honored before the game after recording his 1,000th career point in the team’s 73-59 win over Colgate earlier in the week, recorded 10 points and six rebounds in the game.

“I thought our guards did a really good job of penetrating in the lane and finding the open big guy or scoring the ball,” Muscala said. “So I just tried to focus on being ready to catch their passes and finish at the rim.”

While the Bison struggled to find an offensive rhythm early, their defense was able to hold the usually effective Lafayette offense in check. The Leopards were held to 1-13 shooting from beyond the arc by the swarming rotation defense of the Orange and Blue.

“Lafayette started the game with tough defense, anticipating what we were trying to run. We were still getting good shots on offense but they were not falling,” Willman said. “We knew if we stayed the course offensively and sustained our defensive effort we would be fine.”

Head coach Dave Paulsen explains how perimeter defense was the focus in slowing down the Lafayette attack.

“Our guys did a great job contesting Lafayette’s three point shooters. They had come into the game averaging eight three’s per game so to hold them to 1-13 from three was a great effort,” Paulsen said. “We also did a good job of getting on the offensive glass and limiting turnovers on a night when we were not especially sharp offensively.”

The Bison held Lafayette to one field goal in a 12-plus minute stretch where the Orange and Blue opened up a 26-16 lead. The turning point in the game when Ryan Frazier ’16 hustled down a loose ball on a missed alley-oop attempt and was able to feed a pass to Muscala for the slam dunk.

While Lafayette was able to close the gap to 27-20 before the half, the Bison opened up the second half on a 13-5 to open up a 40-25 advantage, and the Leopards never pulled within 11 points the rest of the contest.

While the Bison shot only 36.7 percent from the field in the first half, they were able to make up for some missed opportunities with an astounding 15 offensive rebounds, led by Muscala, Brian Fitzpatrick ’13 and Willman. The team also took great care of the ball, commiting only six turnovers throughout the contest.

The Bison will continue Patriot League play with a visit to Holy Cross at 4 p.m. on Saturday.