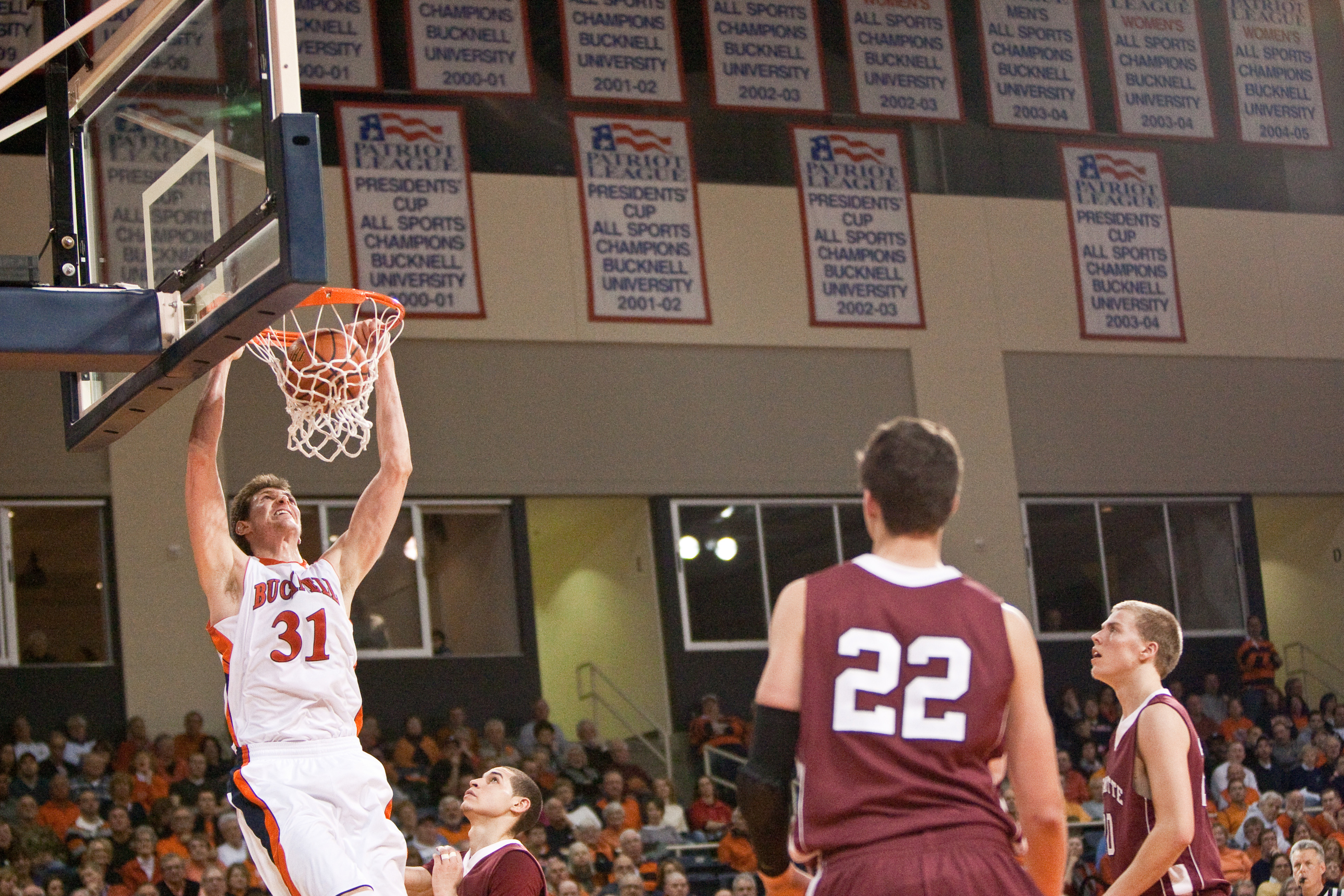 Christian Limawan | The Bucknellian
Mike Muscala ’13 performs an emphatic dunk. His last-second shot against American was the game-winner.

After losing against Lehigh last week, the Bison pulled out a 56-55 victory over the American Eagles in Washington, D.C. on Jan. 30. The Orange and the Blue also defeated Holy Cross 65-58 on Jan. 26. The two wins improved the Bison’s record to 18-4 overall and 5-1 in league play.

Against American (7-14, 2-4), the Bison found themselves down with 2:15 left in the contest, but the Orange and Blue scored the game’s final eight points, capped off by a put back by Mike Muscala ’13 with 0.8 seconds left. Muscala, who suffered multiple blows to his chin during the game, finished with 16 points and 14 rebounds for his nation-leading 15th double-double. Cameron Ayers ’14 also added 14 points for the Bison.

After taking a slim 28-27 halftime lead, the Bison fell behind 39-32, but a three-point play by Ayers cut the lead to 39-35. The Eagles came back to extend their lead to 41-35, but then Ayers and Joe Willman ’13 led a 6-0 run to tie the score back up at 41. Still, the Bison were unable to find an offensive rhythm and found themselves back down by seven, 55-48. Steven Kaspar ’15 hit a huge jumper to cut the lead back to 55-51. The basket started the Orange and Blue’s late game sprint as they were able to pull out their most dramatic victory of the season.

The Bison had to overcome uncharacteristically bad foul shooting (11-24), while only shooting 1-10 from beyond the arc. The Bison used their outstanding defense to stay in the game and benefited from two missed free throws by American near the end of the game.

Against Holy Cross (10-10, 2-3), the Bison were able to erase memories of the Lehigh loss with a victory in Worcester, Mass. The offensive attack was led by Bryson Johnson ’13 and Willman, who each scored 16 points. Ayers was second on the team with 15 points, and Muscala put in 13 points to go along with 11 rebounds.

“I knew I had to be aggressive offensively from the start and just tried to get my team going,” Ayers said. “A lot of guys were in foul trouble so I felt I needed the ball in my hands to attack or to get guys open shots.”

After getting off to a slow start against the Crusaders, the Orange and Blue came out strong, racing off to a 14-8 lead. The team received help off the bench from Kaspar, who contributed six assists. The Bison continued their strong play throughout the first half, and took a 32-28 into the half.

After the Crusader’s hit a three to open the half, the Bison went on a 9-1 to extend their lead to nine at 41-32. Throughout the half, the Orange and Blue were unable to put Holy Cross away for good until the final minutes of the contest. With the Bison clinging to a 53-49 lead with just under five minutes remaining in the contest, the defense was able to come up with three huge stops before Ayers, Muscala and Johnson each hit crucial shots to extend the lead to 60-51. From there, Johnson and Willman were able to ice the game at the line, including Johnson sinking all four of his foul shots in the final forty seconds of the contest.

The Bison held the Crusaders to 34 percent shooting and just 5-16 from beyond the arc.

“We were able to defend their threes due to our focus and preparation on practice. We spend a lot of time going through their plays and their tendencies,” Ayers said. “I think we did a good job defensively but we can also get better.”

The Bison return to action Saturday when they host Patriot League rival Navy. Tip-off is scheduled for 7 p.m.