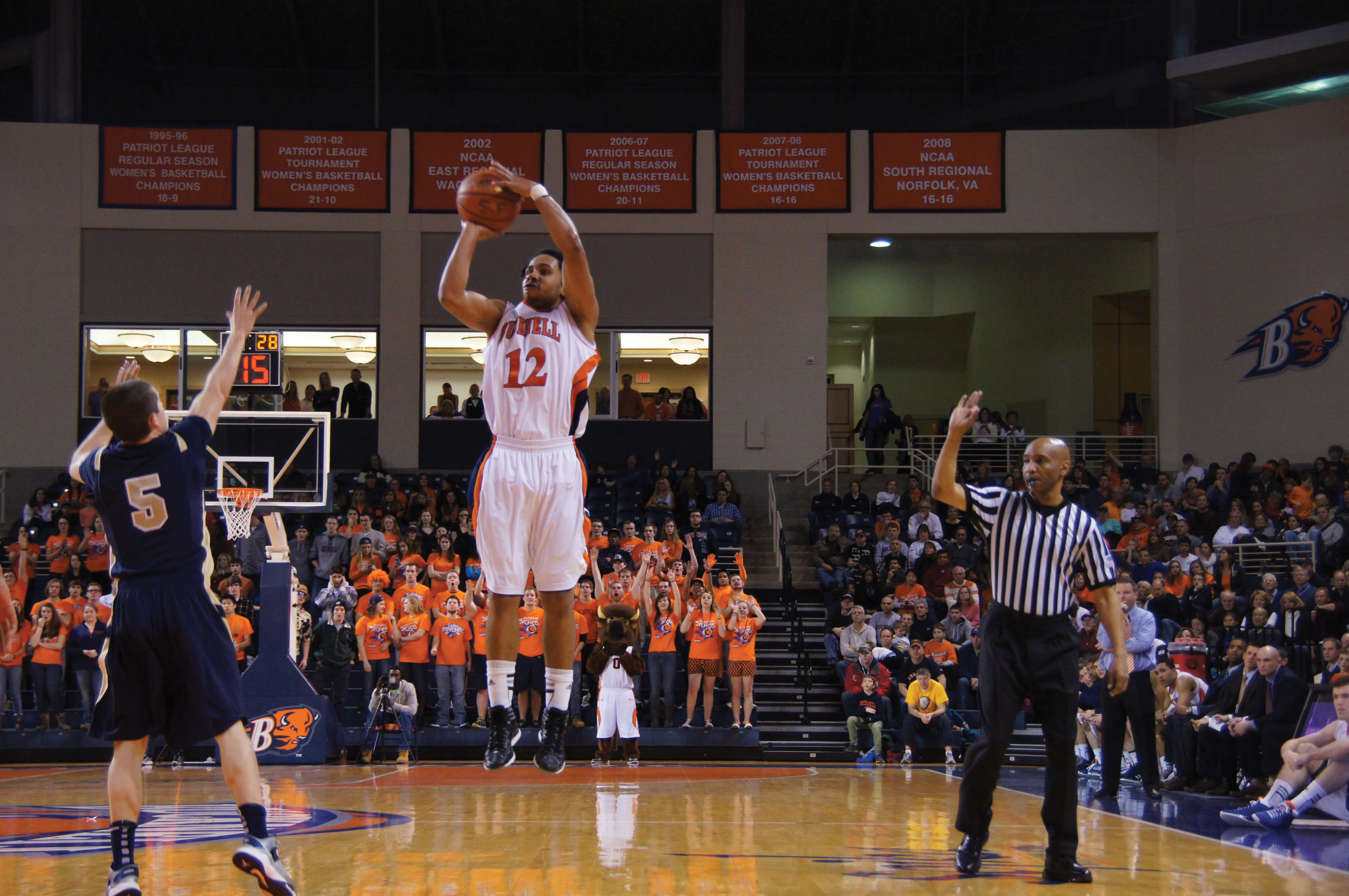 Conor Pierson | The Bucknellian
Bryson Johnson ’13 shoots the ball over a Navy defender in the Bison’s 69-54 victory over the Midshipmen. Johnson lead the team with 20 points.

Bryson Johnson ’13 broke the Bison record for three-point baskets in a career and tallied a season-high 20 points to lead the men’s basketball team to a 69-54 victory over Navy. The Orange and Blue improved to 19-4 overall and 6-1 in league play, while the Midshipmen fell to 7-16 (1-6).

Johnson came into the game needing just one basket to break the record, and he wasted little time, hitting his first three-pointer of the night 57 seconds into the contest for his 295th career three-pointer.

“I never really thought about any records when I first began here, but as I got closer, people kept mentioning it. It was something that happened because I have great teammates who are unselfish and get me open looks,” Johnson said.

Johnson hit another three shortly after his first to give the Bison a 6-2 lead, and after his fourth three of the night, he extended the lead to 19-8.

“I think early on we did a good job throwing it inside and our bigs did an even better job passing back out to the perimeter when the zone collapsed on them, and that gave the wings open looks from the outside,” Johnson said.

Three-point shooting was just part of the story in the Bison’s performance. The Orange and Blue used their size advantage to out-rebound Navy 47-20, led by Mike Muscala ’13, who tied his career high with 19 rebounds to go along with 11 points in 25 minutes of game time. Eleven of the Bison’s 47 rebounds came on the offensive glass, giving them 17 second-chance points.

“Bryson [Johnson] got us started early on with a ton of threes. It was nice to see him break the record in front of the home crowd,” Muscala said. “After that I think we all played our roles well, hitting mid-range jumpers, driving in the lane and then rebounding our misses and converting them into second-chance points.”

The Orange and Blue extended their lead to 16 in the first half before Navy went on a mini-run to end the half to cut the lead to 34-22 at halftime. After Navy scored the first basket of the second half, the Bison went on a 12-0 run to extend their lead to 22. The run began on a driving layup by Cameron Ayers ’14, who was fouled on the shot and was able to complete the three-point play.

The bench also provided a major spark in the second half as the Bison continued to build up their lead. Ben Brackney ’14 hit Ayers for a wide-open three that made the score 53-31 with 7:56 left, and finished the game with four points. Chris Hass ’16 contributed six points, and Cory Starkey ’15 contributed four points and four rebounds. Brian Fitzpatrick ’13 provided tremendous hustle and rebounding, and put in an emphatic dunk off a great pass from Johnson to give the team a commanding 57-35 lead with 6:51 to play.

“We did a good job getting out and pressuring their perimeter players because they have a lot of shooters, so we tried to force them to take shots inside the arc and try to make them uncomfortable while running their offense,” Johnson said.

The Bison return to action Saturday, travelling to West Point to kick off the second half of league play against Army. Tip-off is scheduled for 4 p.m.

“Army is a tough place to play on the road and they play really fast, so in front of their home crowd, they can really get the momentum in their favor with a couple easy hoops in transition,” Johnson said. “It will be a good test for us and we will have plenty of time to prepare for them with no midweek game this week, so we are looking forward to it.”