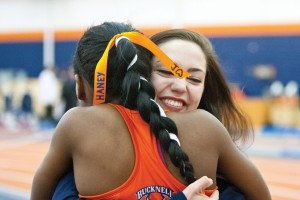 Both the men’s and women’s track teams capped off successful regular seasons with great performances at the Patriot League Championships this past weekend.

The women’s track team won their 15th Patriot League Championship in program history. The Bison entered the final day of the three-day competition with only a 1.67 point advantage over second place Lehigh. As other teams faded after multiple days of grueling events, the Bison continued to perform at a high level.

Behind gold medal performances from Sophia Nnadi ’16, Caroline Tolli ’13, Jennifer Zymet ’14 and Alexandra Romanelli ’13, the Bison surged ahead to win with a final score of 162 points, 52 ahead of second place Navy.

The men’s track team also found great success at the Patriot League Championships, finishing in second place, only 23 points behind winner Navy. The 182 points scored by the Bison would have been good enough to win two of the past three championship meets, but unfortunately Navy had too many strong performances in the end.

The final indoor event of the season for the Bison will be on March 1-3 at the IC4A/ECAC Championships in Boston.