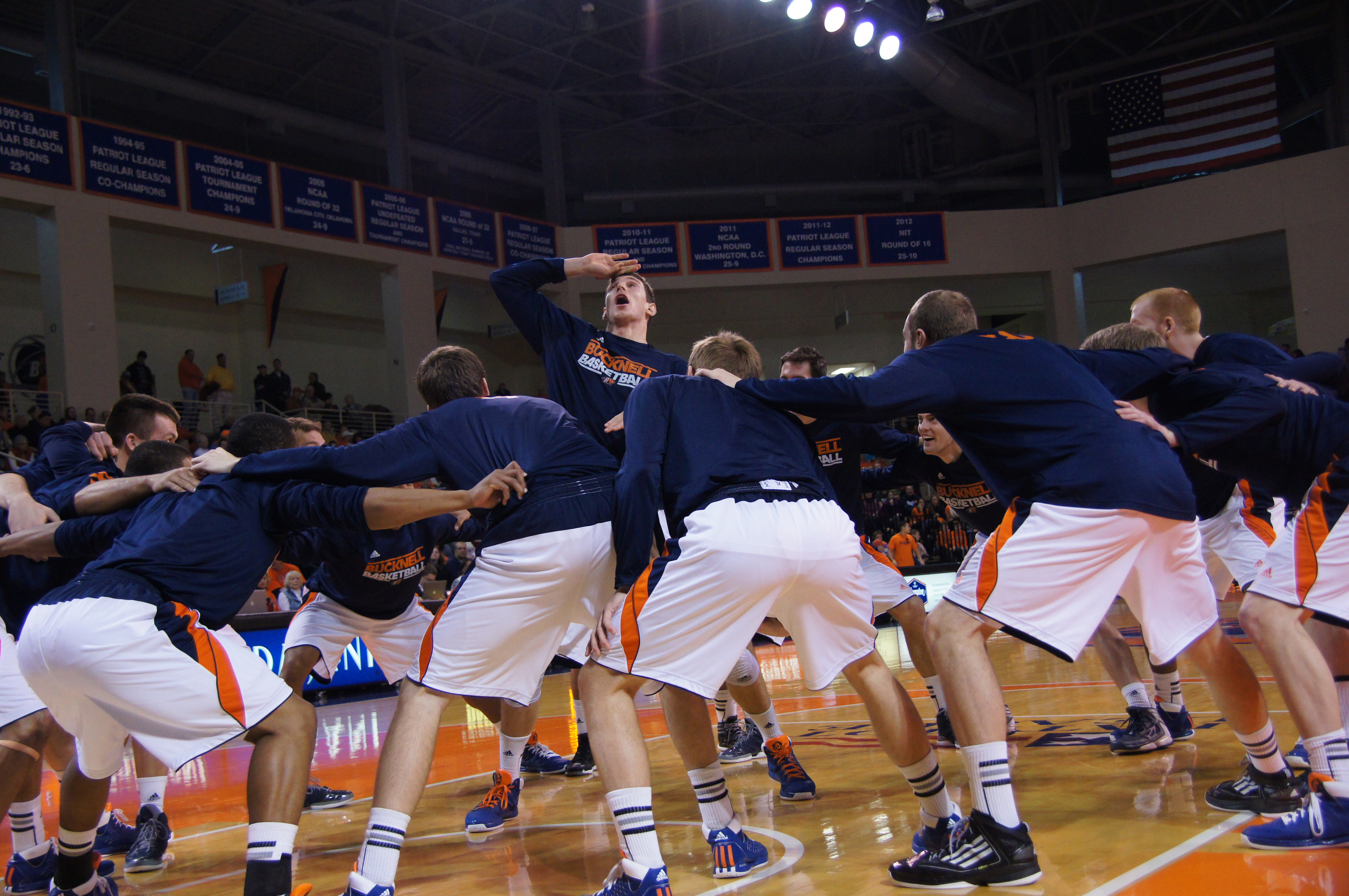 Conor Pierson | The Bucknellian
The men’s basketball team prepares for their game against Holy Cross. The Bison defeated both Holy Cross and American this week.

For the third straight year, the road to the NCAA tournament in the Patriot League will go through Sojka Pavilion. Thanks to convincing home victories over Patriot League Rivals American and Holy Cross, the men’s basketball team ceremoniously clinched its third straight regular season league championship. With the two wins, the Bison improved to 24-5 overall and 11-2 in league play.

Against American on Feb. 27, the Orange and Blue were able to ride a stout defensive effort and efficient offensive play en route to a 66-47 victory over the American Eagles. With the win, the senior class of Mike Muscala, Bryson Johnson, Joe Willman, Brian Fitzpatrick, and Colin Klebon set the program for most wins by a class with 88. With his impressive week, Muscala now has an astounding 1,962 career points, 11 behind the program record set by Al Leslie.

On this night, the Bison were led by Muscala, who scored 21 points and pulled down six rebounds. Cameron Ayers ’14 scored 18 points to go along with six boards and three assists, and surpassed the 1,000 point mark for his collegiate career. Johnson added 16 points with a mixture of three-point baskets and crafty drives to the hoop.

In the first half, the team rode the hot shooting of Ayers and stalwart defense to take a 29-20 lead going into the half. In the second half, the Eagles made a couple runs to get within five points, the last time at 38-33 with 13:07 left. Willman responded by drawing a foul and sinking both foul shots, and Muscala made good on a three-point play to extend the Bison lead to 43-33. Thanks to a three from Ayers and a three-point play from Johnson, the Orange and Blue extended their lead to 59-41 to virtually seal the Bison victory.

On Feb. 24, the Bison completed their regular season sweep of Holy Cross with a 74-57 victory. The senior players were honored before the game.

Against the Crusaders, the offense was paced by Muscala, who finished with 25 points on 11-16 shooting and also added seven rebounds, and Willman who added 14 points, nine rebounds and four assists. Ayers also added 15 points.

“I was able to hit a few jump shots, an area I’ve been struggling in a bit lately. Also, getting on the offensive glass is a huge aspect leading to my scoring,” Willman said. “I think I was a bit more aggressive getting to the basket in part because they have bigger and more lumbering forwards than most other teams in the Patriot League.”

In the first half, the Bison took command early with a 27-12 advantage. The Crusaders did not go away, finishing the half on a 10-2 run to close within 31-24 at intermission.

The Orange and Blue came out firing in the second half, opening up a 42-26 lead, and a three-point play by Muscala extended the lead to 47-28. After the Crusaders made a little push, the Bison put the game away thanks to three’s from Johnson, Ayers and Ben Brackney ’14 that gave the Bison a 70-49 lead.

For the game, the Bison shot 47.7 percent overall and distributed the ball nicely, registering 18 assists on 31 field goals, led by Steven Kaspar ’15, who made his first start of the season as point guard and recorded three of those assists.

“I don’t think my mentality was too different because I was starting,” Kaspar said. “Coach [Dave] Paulsen always stresses that the bench be very involved and energetic, so we are always ready to go.”

Klebon also spoke about his favorite memories so far during his career.

“I would have to say I have two favorite moments. There is a tie between beating Lafayette in the Patriot League Championship and being selected to play Connecticut on selection Sunday. Making the NCAA tournament is every child’s dream and it was a surreal feeling that I will never forget,” Klebon said.

The Bison return to action tomorrow when they travel to Annapolis, Md. to wrap up the regular season against Navy.