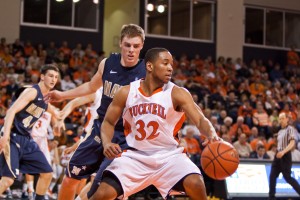 Christian Limawan | The Bucknellian
Ryan Frazier ’16 attempts to juke out a Navy defender in Wednesday’s quarterfinal game. The Bison won 58-42 and will face No. 4 seed Army in the semifinals on Saturday.

The road to the NCAA tournament has officially begun. In a historic week for the men’s basketball program, which included Mike Muscala ’13 breaking the all-time program scoring record, the Bison won a pair of games against Navy, the second a 58-42 victory in the quarterfinals of the Patriot League Tournament after defeating the Midshipmen 62-46 on March 2. The Orange and Blue have now advanced to the league semifinals for the third straight year.

In the opening round of the league tournament on March 6, the Orange and Blue dominated Navy on the defensive end en route to their third victory of the season over the Midshipmen. Muscala, who came into the game just two points shy of Al Leslie’s 32-year-old program record for career scoring (1,973), broke the record with a free throw 3:53 into the contest. The Bison also received strong play from starting point guard Steven Kaspar ’15 who finished with seven points and Ryan Hill ’14, who had a strong game with five points.

In the game, the Bison relied on a smother defense and outstanding free throw shooting to get past a tough Navy squad. Muscala, who shot 9-10 from the line, recorded his 20th double-double of the season with 15 points and 13 rebounds. In the first half, the Orange and Blue held Navy to a mere 22.2 percent shooting en route to a 26-16 first half advantage. The Midshipmen were also held scoreless for the final 5:30 of the first half.

Navy made a mini-run in the second half to cut the lead to 32-23, but the Bison responded with an emphatic 12-1 run. A key point in that span came when Navy committed a flagrant foul on Joe Willman ’13. Willman, who had 10 points and seven rebounds, knocked down both free throws and Hill scored on the ensuing possession. The Bison led by 20 after Bryson Johnson ’13, who had seven points in the game, hit a pair of free throws. The Orange and Blue extended their lead to as much as 23 points before the game was over.

For the night, the Bison shot only 38.6 percent and 2-14 from beyond the arc, but used a balanced offensive attack and were able to get to the line, shooting 22-24 from the foul line on the night.

The Bison completed one of the most impressive and memorable seasons in program history with a convincing victory over the Midshipmen on March 2. Rebounding proved to be pivotal in the regular season finale, as the Orange and Blue outrebounded Navy 35-26, led by Willman who pulled down 10 rebounds to go along with nine points. Muscala finished with nine points and seven rebounds in 23 minutes of game action.

Making his third straight start, Kaspar showed his versatility with an impressive eight points, four assists and two steals. For the game, the Bison had 18 assists on 23 made baskets.

The Bison raced out to a quick 13-2 lead on 6-10 shooting to start the game and held a 33-24 advantage at halftime. After Navy had cut the lead to six near the end of the half, Kaspar forced a steal and found Johnson, who nailed a three-pointer at the first half buzzer.

Cameron Ayers ’14, who finished with a game-high 14 points, opened the second half with two straight three’s to extend the Bison lead to 39-24, and the team led by double digits the rest of the way en route to the victory.

“They tried to play a lot of different defenses against us and we moved the ball around well for the most part,” Ayers said. “We have seen a variety of defenses this year and I think if we keep being aggressive on offense and make the right plays we should have success on Wednesday.”

The Bison will look to advance to the Patriot League Championship tomorrow when they take on Army in the league semifinals.  Game time is set for 4:30 p.m. at Sojka Pavilion.