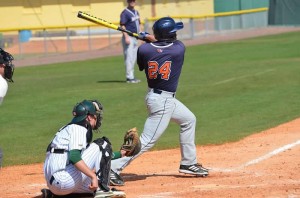 Matt Busch ’13 follows through with his swing. The Bison were 1-3 against Patriot League rival Holy Cross.

The baseball team had a rough week, finishing with a 1-3 record in four games at Holy Cross this past weekend, as well as losing to Saint Joseph’s at home on April 3.

The Bison began Patriot League play in Worcester, M.A. with a win in the first game of a doubleheader. Rob Krentzman ’15 got on the board with his first home run of the season, while Corey Furman ’14 and Travis Clark ’13 both went 4-7 to contribute to the 6-3 win for the Orange and Blue. The team could not keep the momentum going to finish out the second game of the day, ending with a 5-4 loss. Dan Weigel ’14 had a strong performance on the mound with eight strikeouts over 7.2 innings for the Bison, but it was not enough with offensive struggles in the late innings.

The Orange and Blue had similar misfortunes as they finished out their series with Holy Cross with a doubleheader on March 31, falling 5-4 and 9-3 on the day. Furman performed strongly in both games, finishing 4-9, while Clark and Anthony Gingerelli ’15 both contributed key hits to the Bison offense. Dan Goldstein ’13 had a strong performance on the mound in the first game for the Bison, pitching all six innings and striking out seven batters.

The Orange and Blue regrouped to face off against Saint Joseph’s at home, but fell short of victory with a final score of 4-2. Carter Bumgardner ’13 drove in both runs for the Bison with a pair of RBI doubles, while Xavier Hammond ’15 and the rest of the bullpen had impressive performances on the day, but it was not enough to overcome Saint Joseph’s strong offense.

The baseball team will continue Patriot League play with a four-game series at Navy this weekend.