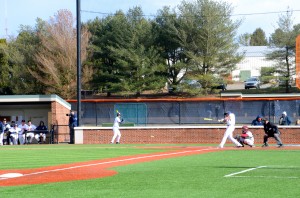 Heather Oros | The Bucknellian
Travis Clark ’13 gets a hit in a recent game. The Bison split their two games against Navy on Saturday, then swept their doubleheader on Sunday.

The baseball team continued its Patriot League season last weekend with two doubleheaders at Navy and came out on top, winning the series 3-1.

The Bison started off the weekend slow on offense, falling 2-1 in the first game of their April 6 doubleheader that went 11 innings before a decision. Bryson Hough ’15 had a strong day on the mound pitching nine innings and allowing just one run, but the only offense the Bison could muster was an RBI hit by Carter Bumgardner ’13, one of his two hits on the day.

The offense found its groove in the second game of the doubleheader, which ended in an 8-4 victory for the Bison. Dan Weigel ’14 threw eight innings while allowing three runs and striking out seven, and Bumgardner continued his strong offensive day with two RBI’s, helping the team build a 7-0 lead in the first four innings.

The Orange and Blue continued their momentum into the second day of the series, winning both games of the doubleheader 3-1 and 16-10, respectively. In game three, Dan Goldstein ’13 pitched a complete game with only six hits allowed, while Corey Furman ’14, Travis Clark ’13 and Joe Ogren ’16 each contributed an RBI.

Things got a little more interesting in game four. Andrew Andreychik ’16 pitched a solid seven innings, allowing just one run in the third inning and five hits overall. Bumgardner and Clark both had home runs in the second game as the Bison offense broke out, scoring four runs in four separate innings. A nine-run ninth inning by Navy kept the Bison on their toes, but Max Kra ’16 came in to get the final out and seal the doubleheader sweep.

The Bison will continue to try to improve their 4-4 Patriot League record with a four-game series at Lehigh this weekend.