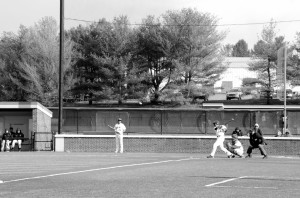 Heather Oros | The Bucknellian
Carter Bumgardner ’13 takes a hack in one the Bison’s recent games. His efforts at the plate helped contribute to the Bison’s four wins.

The baseball team continued its effort to finish the season on a strong note, winning its series with Lehigh over the weekend 3-1, and continuing its winning streak with a victory against Towson on April 16.

The Bison started their final road series of Patriot League play on April 13 with a doubleheader against Lehigh. Bryson Hough ’15 led the team on the mound in the first game of the day, pitching a strong complete game while allowing only one earned run. The Bison grabbed an early 3-0 lead in the first inning thanks to home runs by Travis Clark ’13 and Rob Krentzman ’15, but the offense went silent as Lehigh fought back with four more runs in the final 4-3 loss.

The Bison offense came out strong in the second game of the day and led the team to a 7-6 victory to split the doubleheader. Justin Meier ’14 had three hits in the game, while five of his teammates contributed two hits apiece. Max Kra ’16 also earned his second career save in the tenth inning by retiring three consecutive batters to ensure the Bison victory.

“This weekend was another good weekend for our team,” Clark said. “We lost the first game of the series but were able to bounce back and win the next three. Our team is really coming together in every aspect of the game and it’s all happening at the right time.”

The Orange and Blue continued their momentum into the second part of their series with Lehigh on April 14. Dan Goldstein ’13 led the team with a complete game on the mound in the first game, allowing only five hits and racking up six strikeouts in the 7-2 victory. The Bison offense was led by Joe Ogren ’16, who finished the game with three hits, two RBIs and one run.

Pitching again played a major role in the second half of the doubleheader, this time with Andrew Andreychik ’16 allowing only six hits and one run in eight innings. The Bison were up only 2-1 going into the eighth inning, but an explosive five-run inning including a bases-clearing RBI double by Clark set the Orange and Blue up for an eventual 8-1 victory.

The Bison then took on Towson at home. Clark led the offense once again, totaling four hits and three runs, while Luke Lombardi ’14 and Anthony Gingerelli ’15 had two hits apiece. With the score tied at 4-4, the game went into extra innings, with Kra keeping the game scoreless for 2.2 innings. Kra eventually picked up the win after an RBI single in the 11th inning by Matt Busch ’13 secured a 5-4 victory for the Orange and Blue.

“We have put ourselves in a great position to contend for the first seed in the Patriot League tournament and that’s our goal,” Clark said. “We are looking forward to playing the next two weekends at home and would love support from the campus.”

The Bison will host Army for a series this weekend which will include doubleheaders on April 20 and 21.