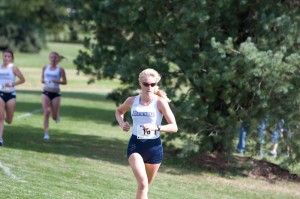 The women’s cross country team earned its second consecutive victory to open the season, and the men’s team finished second when the Bison traveled to western Pennsylvania on Saturday for a tri-meet at Duquesne University against Duquesne and Pittsburgh.

The women completed the five–kilometer course with 18 points, while Duquesne finished with 40 and Pitt with 84. Stephanie Fulmer ’12 won her second consecutive race in 18:00, closely followed by teammate Sarah Moniz ’11 who finished second in 18:08.

“We had one of our hardest workouts last week,” Moniz said. “The workout last week helped to mentally prepare us all for the fast downhill mile at Schenley Park.”

Alysha Hooper ’12 (fourth overall), Kelly Grosskurth ’12 (fifth overall) and Alaina Chodoff ’11 (sixth overall) rounded out the scoring for the Bison, who placed all their scorers in the top 10.

The men finished second in their meet with 54 points, 36 points below first-place Duquesne, who totaled 18 points. Keith Sansone ’12 led the pack for the Bison, finishing eighth overall on the eight–kilometer course in 25:53.

“After going fast with the lead pack I just tried to hold on as long as possible and it ended up working out,” Sansone said. “The tempo of the race both helped and hurt me, I think. It allowed me to go out and run a fast time but because we went out so fast, at least for my liking, I ran out of steam late in the race and was unable to catch anyone late in the race.”

Both teams return to action on Oct. 1 to compete in the Paul Short Invitational at Lehigh University in Bethlehem, Pa. Sansone knows it will be important for the pack to stay together in such a large race.

“When we go to Paul Short and run on its flat course I really think we can accomplish great things as long as we work as a team instead of just individual runners,” he said.

On Saturday, the men’s and women’s cross country teams opened their 2010 season at a non-scored meet against Bloomsburg, Juniata and Susquehanna on the West Fields.
In the men’s race, 10 of the top 12 finishers were Bison. Chris Sacks ’14 won the three-mile race in 14:56.
“Running this race was pretty nerve-wracking, but it helps when you have upperclassmen to look up to,” Sacks said.

The Bison women, coming off a Patriot League Championship, were led by Stephanie Fulmer ’12 (17:13) and Sarah Moniz ’11 (17:14) who finished first and second, respectively.

Fulmer feels the performance of the Orange and Blue will help set the tempo for the rest of the season.

“I think that the meet this weekend was a fabulous start to our season. Having our first race at home was a great start for the freshmen who can right away get that team feeling, as well as an awesome thing for our seniors who are going to play such a huge part in preparing for Patriot Leagues,” Fulmer said.

Both the men’s and women’s teams will return to action on Sept. 18th in Pittsburgh for a tri-meet against Pitt and Duquesne.