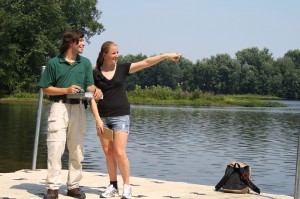 This semester marks the first time University students have the option to participate in the Bucknell on the Susquehanna study abroad program.

Billed as a “domestic study abroad program,” Bucknell on the Susquehanna gives students the opportunity to study the region’s largest river and chief supplier of freshwater for the Chesapeake Bay.

Bucknell on the Susquehanna functions similarly to a foreign study abroad program. For one semester, students take four courses, taught collaboratively between the three instructors, and have a variety of hands-on opportunities with the river and surrounding areas. The curriculum is concentrated mostly on “interrelationships between natural science, society and culture” Kochel said.

Funded by a grant from the Henry Luce Foundation, the program has been years in the making. Wilshusen attributes the development of the program to work done at the Environmental Center through the Susquehanna River Initiative. The SRI’s website lists “natural history, conservation, [and] restoration” among its aims.

Though the structure of Bucknell on the Susquehanna is unique to the University, domestic study abroad programs are common throughout the nation. A number of college campuses, through the National Student Exchange, send students to other North American campuses annually. Those who cannot commit to an international exchange program can spend a semester at a participating campus in the continental United States, Canada, or a number of American island territories.

While studying a local river may not seem as worldly an experience as the other international programs offered by the University, participants of Bucknell on the Susquehanna are focusing on issues of great significance—nationally as well as locally.

Wilshusen expresses anticipation for an upcoming trip to the West Coast to compare attitudes and practices toward the environment on either side of the country. Students also meet with “key actors,” who are involved with the river either through the state or independently.

Participants live near one another on campus to foster a sense of community.

The program strives to provide a feel similar to what one might experience in a more traditional study abroad program. The Susquehanna River serves as a gateway for students, allowing them to engage with the world at large.

Some students would prefer to travel abroad rather than stay in Lewisburg for their “semester abroad.”

“I really want to get the experience of somewhere else,” Mary Matthews ’12

When Linda Kang ’10 decided to travel her junior year with the Semester at Sea study abroad program, she was unprepared for the dramatic effect it would have on her life. She said seeing several cultures over four months gave her a “perspective of the world,” making it “the best experience” she’s ever had.

Now, other students hoping to study at sea no longer have that option.This spring, the University quietly removed Semester at Sea from the list of pre-approved programs for studying abroad after an International Education committee vote. Fall 2011 will be the last voyage for University students.Director of International Education Stephen Appiah-Padi said some departments did not approve of the program’s classes as substitutes for the University’s, and since the “primary goal of studying abroad is academic enrichment,” the issue was brought to the committee. The committee then voted to remove the program, he said.

Semester at Sea allows students to voyage to many different countries, spend time at various ports where professors assign field work and study in a traditional classroom setting on the ship. There are 20 disciplines of study with more than 75 course offerings in the fall and spring terms and over 30 in the summer term, according to the women’s and gender studies portion of the University’s website.

Professors are concerned students do not learn sufficient material, but students see the program as a chance to reevaluate themselves, their country and their world.

Appiah-Padi said because there were dozens of students going on these trips, the program’s approval was questioned. Although Appiah-Padi said it was not a factor for the committee, Semester at Sea is also more expensive than a semester at the University.

The itinerary for the program changes every year, but this semester includes ports of call in Hawaii, Japan, China, Hong Kong, Vietnam, India, Mauritius, South Africa, Ghana and Brazil. The ship visits nine countries in 107 days.

Upperclassmen and alumni who have participated in Semester at Sea are upset about its removal. A Facebook group called “Don’t let Bucknell take away Semester at Sea” has 46 members and many comments that say future students should have the chance to participate. Members also claim it offers a completely different experience than any other abroad program. Some wrote that it helped them stand out in the job interview process.

Sara Baughn ’10 started the Facebook group and hopes to change the thoughts of the committee overseeing the International Education office. She said she’s disappointed program alumni were not notified of its removal, and that future students would not be given the chance to have “an experience unlike any of the other programs Bucknell offers.”

Baughn said she had hoped to sit in on a committee meeting and voice her opinion, but was told to contact the two student representatives instead.

“I learned so much inside, but especially outside of the classroom,” Baughn said.

Kang, a religion and psychology major, said she plans to write a book promoting the program and is disappointed the University has removed the option due to academics.

She said she found it an invaluable supplement to her degree. “Where else could I have possibly gotten to experience so many third-world cultures and world religions first-hand in one semester?” she said.