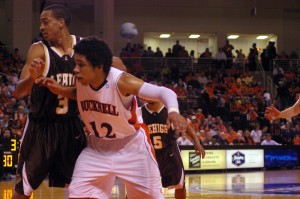 When G.W. Boon ’11 caught an inbounds pass near mid-court to let the final 0.3 seconds run off the clock in the men’s basketball team’s 66-64 victory over Lehigh Sunday night, Sojka Pavilion exploded with cheers from over 4,000 Sojka Psychos in attendance. The Pavilion had not heard that kind of cheer in a Patriot League Semifinal game in a few years.

With the tough victory over the Mountainhawks, the Orange and Blue earned a berth in the conference final, their first since the 2007 season. The Bison had to earn every bit of the win, though, as Lehigh pressured the Orange and Blue and kept fighting until the final seconds.

“We focus on having a winning mentality,” said point guard and team leader Darryl Shazier ’11. “Even with the game as close as it was, I believe that none of the players on our team had a doubt that we would pull out the win. Composure and toughness plays are what win games that come down to the wire.”

Early on, the Bison looked confident, building a double-digit lead in the first seven minutes. During that stretch, Shazier led the charge offensively, recording eight of the Bison’s first 12 points and two assists. Patriot League Player of the Year Mike Muscala ’13 and Joe Willman ’13 each finished the half with eight points, giving the Bison a 36-30 advantage heading into the locker room.

Behind the Bison was a packed, orange-clad, and raucous crowd of Sojka Psychos, who cheered loudly and helped energize the Orange and Blue on both ends.

“Home court advantage is a tremendous component to have on your side,” Shazier said. “I don’t think anyone tops the Sojka Psychos and the energy they bring to the game. The other team not only has to play Bucknell’s basketball team, but also the other 4,000 fans, and I believe that poses problems for other teams coming into Sojka.”

On the defensive end, the Orange and Blue had to find an answer for Lehigh’s C.J. McCollum, who led the Patriot League in points this season. His three-pointer with two seconds left cut the Bison lead from nine to six at the end of the half.

“Our game plan for stopping C.J. is put our best defender on him, which is Bryan [Cohen ’12], and then have everyone else be ready to help if needed,” Bryson Johnson ’13 said. “Bryan is the best defender in our league, and he does a great job on any scorer, even one as good as C.J.”

The effort by Cohen, two-time Defensive Player of the Year in conference, was enough to limit McCollum to under his season point average.

Despite the deficit at the break, Lehigh stepped up the defensive pressure, forcing the Bison offense into costly turnovers in the second half. After two consecutive threes from Lehigh’s Michael Ojo, the Mountain Hawks fought back to tie the score midway through the second half.

“They play a lot of different defenses and really turned up the pressure in the second half,” Muscala said. “We were missing a lot of shots that we usually make, but what kept us in the game during the second half was our defense. They hit a couple threes to make it a close game, but we didn’t panic and stuck with our defensive principles knowing that our offense would turn it around.”

With the score tied at 50, the Bison went on a 7-0 run to seize the momentum in their favor, capped off by a three-pointer by Johnson.

But the Mountain Hawks would not go away and pushed the Orange and Blue as far as they could go. Clinging to a four point advantage with a half-minute remaining, the Bison nearly cost themselves the game. Shazier missed two key free throws, and Lehigh responded with a basket to cut the lead to two.

On the ensuing inbounds pass, Cameron Ayers ’14 turned the ball over on an errant pass. However, Lehigh could not convert on their next possession and two Muscala free throws gave the Bison a hard-earned two-point win.

“While we’ve done a good job recently of hanging on in close games, we’ve also been on the losing end of games like Marquette and Boston College when we were close the whole game and couldn’t pull it out in the end,” Muscala said.  “I think those games, as well as the ones like Holy Cross and Lafayette that we were able to win have taught us how important each possession is and at the same time the importance of staying composed in pressure situations despite mistakes that may have been made. Good teams will do whatever it takes to win.”

With the victory, the Orange and Blue advance to the Patriot League Championship game against Lafayette Friday afternoon in Sojka Pavilion. On the line will be a conference championship and a coveted berth in the NCAA Tournament, which starts next week. But, for the Bison, this game means more than just winning a title for the school.

“The support has been awesome the whole season, and it means a lot to the whole team,” Muscala said. “I really hope we can get it done on Friday and make all the fans proud.”